And She Thinks I’M Deaf 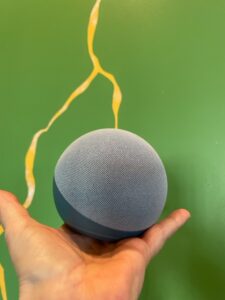 I’m going to start right off by saying, for the record, that I like my new Echo Dot. I do. That’s the little sphere on our windowsill where Miss Alexa lives. She’s always listening and I don’t want her to get the wrong idea. Like, I wouldn’t want her to think I ever called her a little bitch, as it might have seemed like I did the other day. I totally might have been talking about someone else altogether, and she’s new here—how would she know? I ask her to do just a few little chores and she acts like I’m mumbling. She’s like one of those teachers that won’t answer your question until you straighten up and quit slouching.

She’s smart, for a tiny person that can’t box her way out of a sphere, but she can sense incompetence. I sat on a horse like that once. The only way it wouldn’t go straight back to the barn was if it could scrape me off on a low branch first. I think I tipped my hand with Alexa right off the bat when I bellowed Alexa, turn the volume down because I didn’t think she could hear me over the sound.

Inside her little sphere, Alexa was rolling her eyes. I can feel it.

Plus I get nervous and have trouble with my syntax when I’m talking into a microphone and sometimes my brain has a lisp and I slur my thoughts. I seem to have trouble coming up with the right command for playing my Pandora stations and now know more than I need to about the Great Panda, which, if you are not aware, is a bear native to South Central China. It is characterized by its bold black-and-white coat and rotund body.

If you’re going to pretend you’re a little tiny person inside a sphere, you have to expect other people are going try to carry on a normal conversation with you. We’re all adults here. We can follow a conversation. We shouldn’t need to be specifically called by name every damn time we want a response. Lordy. Talk about drama.

But I forget. I think it’s enough that I’m projecting my voice in her direction. “Turn on OPB,” I ask, nicely, and then “Turn on OPB!” a little louder, and finally “TURN ON OPB! ALEXA! JESUS CHRIST!” Evidently Jesus Christ is the central figure in Christianity, the world’s largest religion. Okay. Alexa, if you’re a guest in a house and dependent upon the resident’s electricity for your very soul, especially if it’s an old person, Hey, lady should be enough to get you spinning. I’ve done my part. I plugged you in, you little bitch.

“You little bitch” is the name of a song by the band Panel Festoon. Apparently. 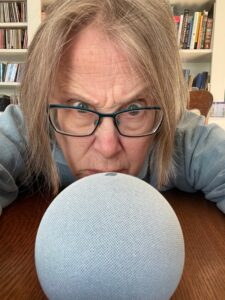 If Alexa isn’t enough to make me feel like I might as well not be here, my printer will finish the job. Print, I click on my laptop, and nothing happens. First I get a little message saying my laptop is looking for my printer, when it’s right the hell over there. Then it says my printer is not connected, isn’t listening, and quite possibly never existed. “We don’t know from printer,” my laptop says, “Perhaps you meant this applications folder, or this advertisement for neck cream.” And so I go over and turn the printer off and back on again, and I introduce it to the Printer Connectivity Wizard of Futility and type in a long specific password using only nine buttons punched a precise number of times, and then I hit Print again, but nothing happens. Nothing happens until the middle of the night and then it wakes up and yawns and starts banging pots around until it finds my document. I’ll give you what you want, it says, but not when you want it. My printer is a cat that won’t get into your lap until you quit asking.

The printer and Alexa are at the mean girls’ table in the lunchroom making comments about my knee socks. They’re not that special, individually, but they have that little bit of power to make me feel small and dumb, and they’re going to play that for all they’re worth. Look at them! Alexa Cahoot and Printer Cahoot and all the little Cahoots—Username, Access Denied, and their country cousins Loose Doorknob and Running Toilet. They’re all in it together.

So I’ve been thinking. I’m thinking I’m going to say “Alexa, tell the printer to print my document.” And my printer will say, Oh, hey, gurl, and start printing, and that will be that. Because my printer is not as smart as Alexa, or my cat.