Death Of A Frog 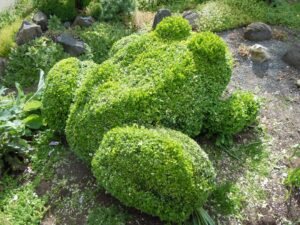 If you’re planning to kill something, you’re better off not naming it first.

My Uncle Cliff was pretty nonchalant about the cycle of life and death on the farm. All his cows were dairy cows, but I can’t imagine that they aged into a big square hole with flowers and a headstone. I imagine they got et. However every one of them was named Bossy and he never warmed up to them emotionally. In fact the day he retired from farming he was positively gleeful about getting rid of the cows once and for all.

Anyway, I never named my frog. Which is good.

Still and all the same, it was a frog, a frog that had been quite a dandy in his adolescence, but had seen better days. Much better days. He did accidentally get an arm lopped off once, but it grew back, sort of, and for a while he was downright spiffy. Then he got old and fat and caved in and half of his head was pitching to portside and when it came right down to it, he was just taking up space. Boxwood works pretty well for a salamander but when you can’t tell a boxwood frog from a gigantic lumpy mushroom, you haven’t really gained anything. 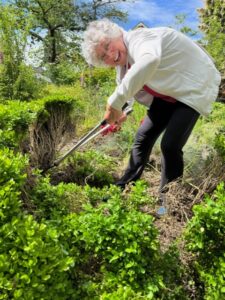 But it was hard to actually pull the trigger. “This is going to hurt me more than it hurts you,” I’ve been known to say to trees I’m pruning, but it’s not true in this case. Frog’s gonna die. So I waited until my friend Linder came to town. Linder is a woman of deep empathy and appreciation for the natural world and if anyone could help me humanely execute my frog, it was she. I imagined some sort of small ceremony. Parting words, hands raised in blessing, burning of sage. Some appropriate Linder-acknowledgment of the glory and gift of the biosphere. 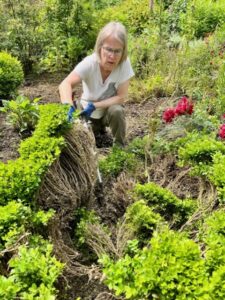 “Okay, let’s whack this sucker,” she said, unceremoniously sweeping its big-ass frog skirts aside and exposing its naked feet for the amputation. WHACK.

All righty then! That works too.

If you’re going to murder something anyway, there’s nothing to be gained by feeling shitty about it. 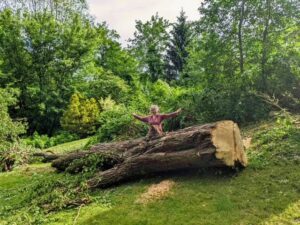 It’s all about context. Linder lives on a one-acre plot that is elaborately laced with garden beds and bird feeding stations and backed up by woods she has either left alone or added to. I recently totted up 28 bird species I have ever seen in my yard. At Linder’s house you’ll count that many before your morning dump. A couple days before she flew to Portland, she was awakened at two a.m. by the sound of her centrally-located silver maple tree crashing to the ground. That sucker was eighty feet tall and twenty feet in circumference and it was only a matter of luck (a commodity Linder cultivates assiduously) that it didn’t land in her bed or level her house. The fellow who came by to estimate removal insisted she stay out of the second floor altogether until he got the other two leaders of the maple out of there. The remaining trunk is punky as a box of lint. Half of her garden beds are smashed, all her birds are confused, and she has to research sun-loving plants now.

She didn’t have any sentiment left over for my frog. Which is just as well. I don’t miss it either.