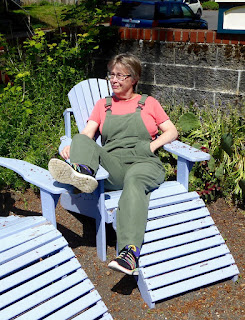 In the olden days, life used to be clunkier. You had to write out checks and put them in envelopes and stamp them and run them to a mailbox just to keep your lights on. You had to show up on time to things or otherwise your friends would be worried sick. You couldn’t get a copy of anything unless you planned in advance and had onion-skin and carbon paper. And in the olden days, you never had a picture of the exact thing you want show up in the margins of what you were reading, and if it did, you couldn’t pay for it just by pointing at it.

No. If you wanted to find your exact right thing, you had to shlep through stacks of catalogs. They came through your mail slot in quantities sufficient to prop up the entire Postal Service. If you happened to be a mail carrier, you got to see every catalog there is. (Ladies and gentlemen of Route 531, sorry about the pizza stains.)

I found my very best thing in a catalog. It was a pair of Early Winters Butterfleece Women’s Overalls. One glance was all it took. I ordered those puppies and never looked back. They look exactly the same as when they were new, even though I wear them all the freaking time and they’re at least thirty years old. I’d wear them to church if I could get away with throwing a mantilla over them, and if I went to church. 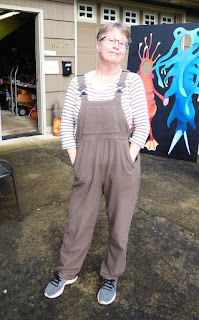 They’re only as heavy as a cup of butterfly wings, and other than that tiny suggestion of weight at the shoulders, they feel like naked-time, only warmer and less alarming to passersby. You can basically walk around inside them. You can slip an arm in them to scratch your butt without anyone even knowing. You can gain and lose the same fifteen pounds and they don’t say a word. All of your bodily secrets are safe with them.

And that is why, for thirty years, every single time I put them on I get at least one compliment. From a woman. Complete strangers go out of their way to tell me how cute they are and ask where can they get some. Let’s call that three times a week for six months a year at thirty years–two thousand one hundred sixty compliments. From men? Zero.

(That’s almost true. One time, a man told me they were absolutely darling, called me “girlfriend,” and asked if I wanted to hear the specials. But he lived for tips.) 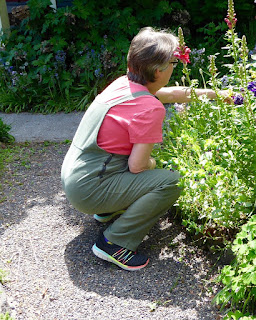 Dave, who has not lived this long by being stupid, has never weighed in on the subject of my overalls. If prodded, he says he likes them because it solved Christmas for him two years running. I have the same overalls in three colors.

It’s only been a little while since I learned about polar fleece. Polar fleece is essentially plastic. Polar fleece is made out of fossil carbon deposits and future dead sea life. So it’s a good thing it lasts. Some day hundreds of years after the big earthquake I’ll be discovered as a tidy pile of bones in fleece overalls that haven’t changed a bit. The archaeologists will guess my height and age accurately and commission an artist’s rendering of me in those overalls. Maybe they’ll give me eyebrows. The caption will reference a woman in “really cute” typical middle Anthropocene garb. That is because there are going to be a whole lot more women in science, baby.