You may recall that I’ve had a chickadee manufacturing plant just outside my writing room window for six years now. I sit in the calming vicinity of a blank document on my computer screen and observe closely, in the service of science. And in all that time I have failed to see a baby chickadee emerge from the birdhouse. All signs point to the fact that they’re in there, but we have no visual proof. Last year we did manage to identify baby chickadees that had rolled off the assembly line, by spotting them in the three-hour interval before they become indistinguishable from their parents. We knew they were babies because they had clown lips, and because they had blundered onto our windowsill and were looking inside our kitchen. Adult birds rarely show any interest in our kitchen. They can find their own food. 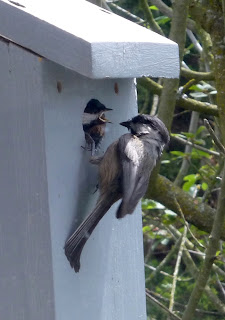 Our chickadees, Marge and Studley–the Windowsons–have been running this franchise for years now. Even if they’re not the original Marge and Studley, how will they know? The Windowsons look exactly alike. And we knew the babies were going to look almost exactly like them too. Many baby birds do not. Many wear kid outfits, partly to camouflage and protect them, and mostly to annoy beginning birders, who are not going to find them in the field guide.

In theory I should be able to watch the birds leave the nest. I have a good idea when they’ve busted out of their shells, because Studley picks up the pace in hauling in groceries, and you can almost hear peeping. And I know approximately how many days it takes before they’ve taken in enough groceries to flap away, because I looked it up. With that in mind, yesterday I told Dave I was going to pop upstairs and see if there was any news on the chickadee front. 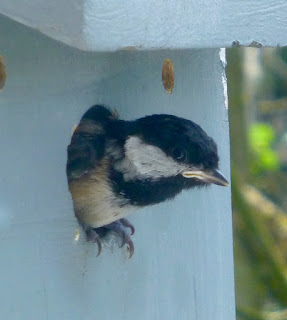 And for the first time, I saw it! An authentic baby chickadee head sticking out of the nest box hole! Clown lips and everything! Marge and Studley were just outside making wheedly noises. Houston! This was it! Junior was on the way out! WAY TO GO WINDOWSONS!

Junior pulled his head back in. All morning I watched as the Windowsons continued to haul in grubbage and Junior peered out. Junior looked up. Junior looked down. One time Marge went inside the box and then Junior appeared at the hole. Was she going to poke him in the fanny and get him off the dime? No. He pulled his head back in and she flew out.

We had things to do. A watched chickadee puppy never flies, I told myself, and turned away. Or flutters. Or rockets out sideways. Or ricochets. Or drops straight to the ground like a ball bearing. Shit. I don’t know what they do. I turned back.

But eventually I did pull myself away, and Dave and I went for an all-day constitutional. I reasoned that I’d already seen more than I’d seen before, and perhaps I’d have to wait till next year to see the big moment, the first flight. We got in late. I ran up to the window. It was a gol-durn miracle. They were still there! Nobody’d made a break for it! Grubbage still going in, poop sacs coming out. Marge and Studley both look like hell, honestly, especially Marge, or maybe Studley. They’ve worn their feathers to a frazzle. Neither of them has had a bath or a moment to themselves in weeks. 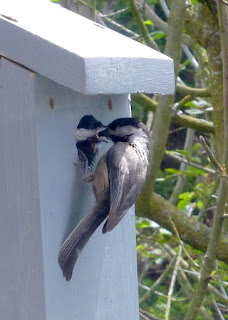 This morning Junior poked his head out again. I don’t know what happened yesterday, but today he was brandishing an inch-long whisker in his beak. Or possibly it was an insect bit that didn’t make it all the way down the maw. I don’t know if he’s planning to use it as a fencing foil or a curb-feeler. All I know is the dude’s ready. He’s ready for anything.