A Ridge Too Far 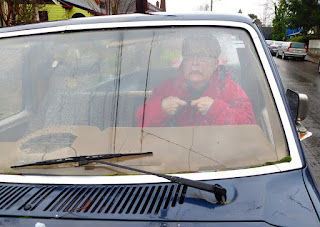 So yes, I can drive a stick and I can parallel-park, which makes me better in some ways than many youngsters. Better at things that no longer need doing, but who’s quibbling?

However I would be fibbing if I said I really enjoy shifting gears. I got my first automatic car ten years ago and the only stick shift I ever encounter anymore is on our truck. My particular economy of stature is not what the designers of our truck envisioned. My feet barely aspire to the floor. In order to drive the truck at all, I have to reach underneath the bench seat and try to motivate the whole thing forward, but I’m not as strong as I might be and if no one’s there to help I usually only get it half whanged out, and not really as far forward as I need. That means I’m on the edge of the seat and at an angle, and when I put the clutch in, my leg is completely extended and also I’m driving with my tippy-toes. If my ass ever goes flat, I won’t have any grip on the seat at all. The only reason I haven’t hit anyone yet is probably because my driving is so erratic that everyone clears the hell out of the way. 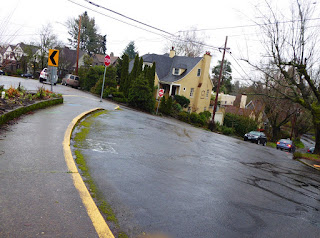 But I haven’t hit anyone yet, and I’ve been driving this or our previous, even-bigger truck for thirty years. Mostly without complaint. Except when I’m bringing home a load of something up 33rd Avenue. 33rd Avenue has this one steep spot with a most unfortunate traffic light right at the top of it. I get a couple yards of steaming cow shit in the bed and I’m screaming all the way up the hill. I’m screaming at the people in front of me if I think they’re going to mosey me out of making the green light, and then I’m screaming at the people behind me if they’re planning to come right up on my bumper. I don’t want them right up on my bumper. I want them about a quarter mile from my bumper, assuming a prayerful position. I try to communicate that with enthusiastic gestures in the back window but it never works. “Oh look, George, there’s a crazy butch lady in front of you. I think it’s a lady. Get up closer so we can see.”

Apparently no one is used to manual transmissions anymore. They assume if the truck full of steaming cow shit is stationary on the hill ahead of them, the only way it can go is forward. That is not at all the only way it can go. Particularly if I’m at the wheel. Sometimes I even signal the problem to the people behind me by rolling to a stop and then toggling back and forth with the clutch and gas so it rolls back a bit–then forward, then back again–but this only seems to fascinate them.

So when the light changes I have a couple options, if what you mean by “options” are things I can control in theory. I can stomp on the gas and simultaneously rip out the clutch pedal and go forward very noisily. Or I can do that and stall out and coast backwards with no power and burst into tears. It’s a crapshoot. I truly hate driving this street with a full load. I am a nervous wreck.

But we live on relatively high ground and elevation must be gained one way or the other. The problem, as I see it, is glacial Lake Missoula. We had a perfectly decent river basin here at one point, formed as a standard bit of scooped-out area in front of a group of volcanoes, and it should have been perfectly easy to haul a steaming bunch of cow shit home on it, but then came the Missoula Floods and their biblically massive cargo of sediment from eastern Washington, forty or so episodes of it, and our little neighborhood got progressively taller, and the portion at the top of 33rd Avenue in particular got taller. We  had a minor volcano in the way of the floods coming down the Columbia River, and while it got briefly turned into an island, the north portions of it got scrubbed off and deposited as a giant gravel bar. This was great news for the future denizens of the so-called Alameda Ridge who would have a nice view of the city and a bunch of money to enjoy it with, but it was terrible news for those of us further north with all the elevation and none of the view and only passable driving skills and possibly a steaming load of cow shit. And, arguably, for the people driving behind us.

The entire situation is so ghastly that I’ve taken to skirting the Alameda Ridge altogether. Further west there are ways to gain that elevation but not quite so fast, and as much as I’d like to take a direct route, there’s something to be said for getting home at all. I don’t have to go too far out of my way. Just 15,000 years or so.