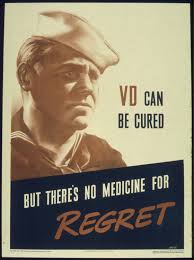 Some enterprising teenagers invented a new condom that turns different colors if you have a sexually transmitted disease. Isn’t that festive? My guess is that it is not the condom-wearer but the condomee who would insist on this particular brand. “Put this on,” he or she will say, “and let’s have a look-see before we take this sucker out for a spin.” This just builds on the natural tendency of a person about to be on the receiving end of a penis to want to check the item for odd coloration or accoutrements. One might not know what one is looking for specifically but it’s like examining leftover meat in the refrigerator. If it’s a little green or bumpy, you might want to skip it. 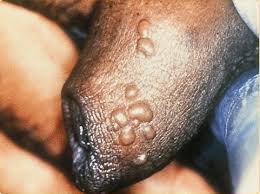 There are all sorts of possibilities for the condom, if you think about it. They could add a little sticky strip at the base for lice. It might turn pink for chlamydia, say. Or green for the clap, or yellow for herpes. If the condom turns black and the dick falls off altogether, you could be dealing with a zombie. If the condom bursts into song (and it’s always going to be Rock of Ages, Cleft For Me), you’ve got a Baptist on your hands. But if nothing happens (and the condom doesn’t fall off, which is a bad sign all its own), you’re good to go.

Puts me in mind of the Mood Ring. This was a cheap ring with a fake stone in it that turned colors and was supposed to reveal the mood of the wearer. If the ring turned red, the person was hot to trot. Mood rings were purchased only by girls younger than 13 who wanted any excuse to giggle and point at each other and shriek. No male ever bought such a ring. Male teenagers had a much more reliable indicator of horniness. It worked something like the buttons that pop out on your Butterball turkey when it’s ready, only, in many cases, a little larger.

There were all sorts of color-related things we were supposed to keep track of back then. The various colors of roses were all supposed to have specific meanings, and you’d better know the code before you buy flowers for someone. And there was a thing about wearing yellow on Thursdays, which meant you were–you know. I never knew, but I nodded as though I did.

If the boys’ condom invention pans out, there’s a much broader market to tap out there. They could develop party hats that turned colors. Everyone is issued a hat when they walk in the door, and folks could mingle accordingly. They could turn one color for Amway distributors. Another color for people who want to know if you’ve accepted Jesus Christ as your savior. A third for people with a phoneful of photos of babies, dogs, or vacations. And a fourth for folks who’ve had recent knee surgery.