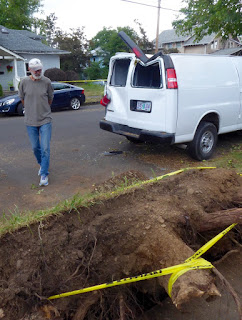 As natural disasters go, this one was on the puny side, but it got bonus points for zest and caprice. I mean, no matter where you live, you carry with you a notion of what’s liable to get you, and what isn’t. You develop a steely, studied nonchalance toward the likely events and the rest aren’t even on your radar.

Even when it’s a tornado, which is something that is totally supposed to be on radar.

So here in our little neighborhood, we don’t give any thought to wildfire, or flood, or hurricane, or tsunami, or avalanche, or tornado. We’re urban, and on high ground. And yet in the space of a few months we’ve had a flood, when a major water main blew up and emitted 30,000 gallons of water per minute into the streets for hours, and a tornado, caused by God only knows what, although localized outbreaks of sodomy are as good an explanation as any.

Homeowners were on the hook for related damages both times. Nobody carries flood insurance or tornado insurance. We still recall the homeowner who couldn’t collect when his neighbor’s entire house slid down a hill and crashed into his, because his insurance policy didn’t cover house-to-house collisions.

The insurance industry is in the business of making shareholders whole.

What we are instructed to worry about here, in the way of natural disasters, would be your massive cataclysmic earthquake, or your volcanic ash-fall. That’s about it. So when our tornado touched down, residents shaking in its path were probably thinking: Wow, I knew it would be loud, but I didn’t expect it to be this wet.


We were four blocks away and it was just one of those sudden deals wherein the sky looks bent for a minute and then God’s own bucket of hail comes down. Nothing unprecedented about that, just another meteorological event in the “doozy” category. We did get one ton of rain and hail for about ten minutes. It was compelling. Dave came bolting through the front door from his walk, looking like a drowned rat, followed by a raft of actual drowned rats for comparison, from the dumpster of the Mexican place on the corner. It was something. Salmon runs convened offshore and considered a comeback. Cactus fields a thousand miles south shuddered into bloom.

But four blocks away trees were coming down, and people peered out their windows to see lawn furniture and branches and surplus poultry and an old bat on a bicycle flying by. It’s just not the kind of thing anyone expects. 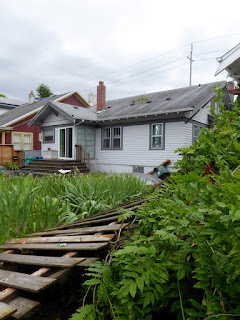 And that is because weather apps are not all they’re cracked up to be. I particularly enjoy Accuweather because of its audacity. “Rain starting in 119 minutes,” it will smoothly report, which is just the kind of specificity that can fill a person with confidence that everything is well under control, but nowhere in the Monday report did it mention anything about a petite tornado touching down at 5:24pm. And the nearest trailer park is four miles away.

It was only an 80-mph tornado, just strong enough to make eyes roll in Kansas. But it’s not supposed to happen at all. What’s next?