A World Series, And Everyone’s Out 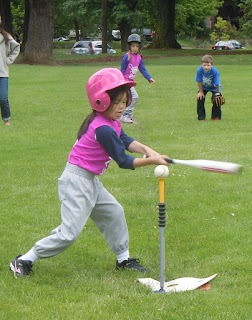 We love baseball. Any kind of baseball: major league, park-league, softball, even the kind where short people dribble the ball off a standing tee and charge off to third base to wave at Grandma. All of it. It’s the greatest game in the world. And, in as good a sign as I know of that America is headed down the wrong path, no one seems to play it anymore. A casual stroll through any neighborhood here reveals perfectly sound softball fields with nobody on them. Kids can be found playing something close to soccer, and basketball courts usually get some action, but we’re  hard pressed to find anything baseball-like to watch. At this point, I’d go to all kinds of trouble just to see a game.

Which we proved the other day.

A tiny notice in the paper said the Gay Softball World Series was taking place all week long right here in Portland, and one of the fields was within walking distance! Huzzah! I inked Tuesday on the calendar.

Tuesday turned out to be the day the ash from the gorge fire was falling on Portland and we had been advised by all media to stay indoors and breathe shallowly, because we are old farts. But we’re contrary old farts. When have we ever listened to advice? 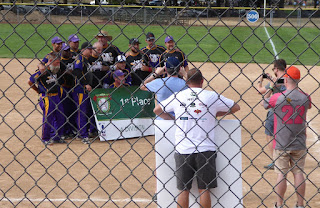 Delta Park was only four or five miles that direction (I am waving my finger vaguely northwest), and we zigged and zagged our way through the residential areas with confidence. A gentle breeze scuffed up the ash in the alleyways but we persevered. We’re old: we got skills. And nose hair. Then we pulled up at Columbia Boulevard and frowned at the next mile.

One of the things we appreciate about Portland is that we can walk just about anywhere. There are sidewalks and blinky crosswalks and water fountains right there on the street. But suddenly, past Columbia Boulevard, things got real auto-y.

After slogging on the narrow, trash-strewn shoulder of a loud, fast road, we bailed out onto a little service road and confronted acres of warehouses with cyclone fences. The service road wasn’t going the right direction. “Let’s bushwhack,” I said. Dave looked grim. Bushwhacking wasn’t the sort of  thing an urbanite in a pedestrian-friendly city should be expected to do. Plus, he wasn’t nearly as confident as I that we’d ever find the field.

“And,” he muttered, “I’d put the chances that we will actually find a working softball game today at zero.” This is Dave’s style. He likes to be pre-disappointed so as to save time later. But he followed me. We skirted several hundred yards of cyclone fence on something like a human deer trail–well-worn, narrow, its side shoots spangled with trash and tent-parts and petering out in the blackberries. Rounded the corner, reconnoitered, checked slant of red sun, dead-reckoned, bent our ears toward any crack of a bat, opted for a winding trail over a slough and behind another cyclone fence, stayed true to instinct, wound through a sea of Dumpsters to a new patch of payment, and lo!

And just beyond, the five pristine softball fields of Delta Park. 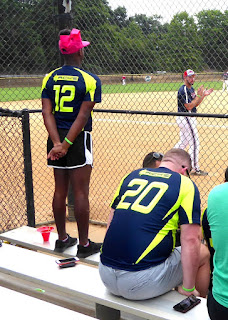 “This is great!” I said to the first friendly face. “Are there any women playing today?” My new friend looked wary.

“Well, this is the gay World Series,” he said, cautiously.

“I know. But are there women?”

He paused. “Depends on how you look at it,” he said.

There were women, as it turned out. Three or four, on just a few teams in the D-division. That’s just the way it is. No offense taken. There aren’t many women who can compete with grown men, and that’s just a fact. The D-division was fun to watch, but relatable. In that they made mistakes. “Run it out, run it out!” I hollered. “Where’s the backup, where’s the backup?” I hollered. I have no skill at all, but I know how to play, and holler. The Seattle Honey Badgers lost, but they didn’t give a shit [you know you want to see it again]. We came back Friday and Saturday. 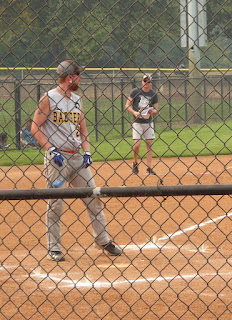 The smoke was gone. The A-division was tremendous. The beer was outstanding.

And on our way out, we caught the end of the Masters tournament: age fifty gets you in. I’ve been after Dave for years to join a Masters team, but he won’t do it: too sure he’d be disappointed in the skills and strength he’s lost. As though the point of a Masters team is to prove you’re still twenty.

He could. Even he could see it. At 66, he could play any position in that field.

And he wouldn’t even have to stop to tinkle on the way to home plate.