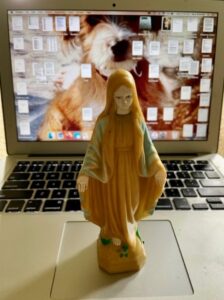 It started, as it always does, by my trying to fix my computer myself. My logins and passwords used to fill in automatically and for the last year or so they haven’t. It’s mildly annoying. I Googled “broken keychain” and—I had to admit—it all looked pretty straightforward. Applications Utilities Keychain-Access Preferences General Reset Authenticate Hail Mary Bip Bam Boom. Easy! [Cue shark music.]

Here’s the cool thing about that. My internet provider company is so small—there’s, like, three guys and they work out of a large closet in Goose Hollow—that I can call them up and a warm human answers, swear to God. He’s got a magic machine he can peer through and see mine from all the way across town, and then he fixes everything. One time he off-handedly mentioned I had nice legs and I thought he could see them through my screen, because I’m unclear on how things work, but it turns out he remembered me from when I brought my computer in for him to fix, which he did for free. Anyway it’s a fine outfit.

So he said let’s just get you a new email password and we’ll put that in the little box and everything should be fine again. And it was. It was!

For a day. Then the connection failed again. It was Friday evening and my company doesn’t work weekends, so I resigned myself to calling Monday. Maybe that seems kind of podunk—not working weekends—but it’s better than dealing with Big Fiber Optic where you can fail to be served 24/7.

But the next day it came on again! A hundred sixty emails clattered in all at once. Yay! Then it went out again. Ten hours later it popped on for an hour and then quit. I called first thing Monday.

Took the guy a few minutes to figure it out. Did I get mail on any other device? Well, my phone, I guess, although I hardly ever check it. Did I change the password on my phone? No I did not. I really didn’t care if I got mail on my phone. Aha! That was the problem. Apparently every time my phone woke up (I try to not disturb it, so that’s not often) it would fruitlessly hunt around for mail. And somehow that would make my laptop pout also. Once my phone was sleeping soundly I might get more mail but next time someone texted me it started scouting again and eventually my whole digital neighborhood was in a sulk.

Thanks! I said. I’ll go put in the password.

Years ago, children, when your correspondent was young, no one ever spent hours waiting to speak to someone with a heavy accent for days at a time to fix something that didn’t even exist before but was now indispensable, only to get nowhere at all and burst into tears on the phone with an Indian lady named Victoria. So in the old days there was no joy quite comparable to the joy of poking at some keys and seeing everything suddenly work again.

There wasn’t this time either. I put in the passwords and my phone said it could not verify the information.

I called my guy back. Oh. Evidently my IP address had been blocked by the Umpire of the Ether because my phone had tried one too many times to break into my email. So he unblocked me. Now it works.

But nothing good lasts forever. My darling SpireTech is pulling up stakes at the end of the year. The boys will haul everything out in a few fruit crates and hit the road. I’ve been advised to find myself another email provider in plenty of time to let everyone know. I have no idea where to go. I have a gmail account that I don’t use and I don’t know who’s in charge there, but I’ll bet they don’t answer the phone. The internet being what it is, though, they might already know about my legs.