All The Beauty I Can Afford 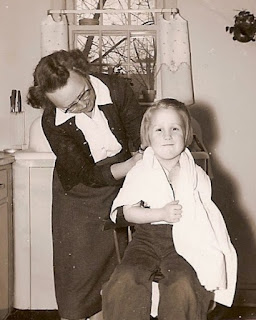 Every now and then, probably when Mom was using the haircut bowl for something else, Daddy used to take me to the barbershop for a dollar haircut. My hair was snipped halfway down my ears, parted on the side, and pulled off my forehead with a small barrette raked across my scalp. I think I can still feel the furrow. Mom could jam that sucker in there so that it would last all day. There was enough DNA in one of those barrettes to clone me.

By the time I was tipped unwillingly into adolescence, by a sheer stroke of genetic fortune I had the kind of hair that was popular at the time. It was straight, light, and long enough to iron on an ironing board without bending over. In fact the object for the next eight years was to grow it as long as it would naturally go before petering out into a fuzzy hem of split ends. That would be just below the butt crack, so  it was pretty long, although one must note that there isn’t as much distance between my head and my butt as there is on regular people. But still.

And that is why I never had cause to visit a professional beauty salon until I was a junior in college, when I was living in London and suddenly unfashionable. Since I hadn’t had a haircut in eight years, I decided to go big and go to the Vidal Sassoon salon. That’s where I first learned that there are two parts to the beautician’s job: to make you beautiful, and to persuade you that you are in calamitous need of being made beautiful. That, in fact, you are hopeless and pathetic, without professional assistance.

“I don’t know,” the man said, curling a lip in distaste, lifting a section of my hair and letting it drop. My proud, glossy curtain was abruptly revealed to be a sad, stringy bundle of possum fur. Lift, drop. Grimace. Lift, drop. Grimace. Tsk, tsk, cavernous sigh. “I guess I can do something.” With a look of bleak despair, he asked me what I had in mind. Thence came the following exchange, a classic of dueling idioms, in which I, in my American accent, apparently declined a proposition he never made, and he introduced me to the British term for a hairstyle that can be maintained with a hair dryer alone:

The execution of the haircut–at that point, whatever he wanted to do–progressed in awkward silence. 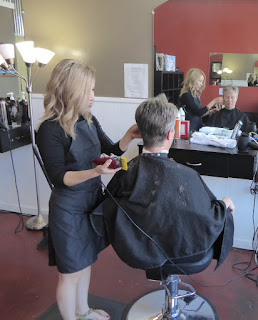 Subsequent professional haircuts followed the same pattern. The beautician stood behind me, lifting and dropping my hair while glowering into the mirror, and finally allows he might be able to do something with my hair if he does enough texturing and sells me enough Product and only because he is a genius. Once I visited a friend’s recommended stylist and it all went pretty well, in the sense that he kept his despair about what I’d given him to work with to himself, and I thought the result was just fine too, when he spun me around and gave me my glasses back.

“Do you want me to do anything about this?” he said.

He puckered up his face in genuine concern and ran his fingertips over my cheeks, where, for the very first time, I was made to notice I had a fine thick blonde beard, and that there might need to be something “done” about it.

“No, thank you, that’s fine the way it is,” I said, reserving a portion of his tip for an extra adult beverage.

So went the next thirty years, during which I twice grew out my hair long again so as to avoid seeing myself through a hairstylist’s eyes, and now I’m back to short, especially since there is a nice barber right around the corner who charges me the senior rate of $12 even though I’ve told her several times that, in spite of appearances, I’m three years shy. “Oh go on, you,” she giggles, and continues to charge me less. I’ve decided to accept that. 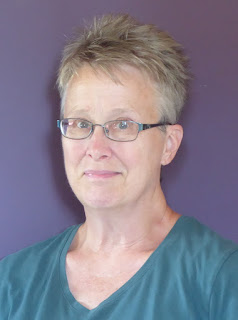 She also asks me what I want. And then she tells me I can’t have it. “You can’t go that short,” she says. “You have those cowlicks in the back. It will look weird.”

Or “Your face is too long.” Or “You need more hair to cover that thin spot at your temples.” Or “That gray is washing you out.” Or “You might want to pull the attention up and away from your eyebrows…at this point.”


But the last time I vowed to persevere, and I demanded it short. Very short.

“How short?” she said, masking disapproval.

As long as it’s just a little longer than my beard, I’m good.