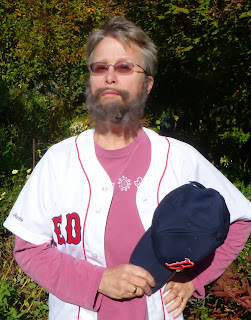 It’s the season. That apple tang is in the air, the sun is sliding lower, the chains are jingling under the school buses. I feel that salt-peanut jones coming on and I close my eyes and drift to heaven: Fenway Park. Hot dogs. The Green Monster. The huge pillar between the seat I paid for and home plate, and the crick in my neck.

Fenway Park opened in 1912. It set the standard. This is how you build a ball park: hire a drunk to lay the line for the outfield. Throw in random shit for obstacles, like some twentieth-century version of Angry Birds. You’re not going for perfection here; you’ve got a squashed pentagon of a city block to fill in, next to a swamp. The outfield is shaped like a hound’s-tooth check, with a dipsy-do in right field lurching into a sort of fang in right-center, and over on the left you’ve erected a massive wall to keep people from catching a game for free from Landsdowne Street. But don’t stop there. Check your roster for assets and liabilities and then screw around with the dimensions of the field until you wring some home runs out of it.

Forget square: this field didn’t even used to be flat. There was a ten-foot terrace in left field up against the wall. That was to make up the difference between the field and street level. Fans were welcome to sit there and the fielders had to run uphill to make plays without trompling any of them. A guy named Duffy was graceful enough at it that they called it Duffy’s Cliff, but Bob “Fatty” Fothergill tripped on it and would be rolling still if he hadn’t flattened the shortstop and fetched up near second.

The wall wasn’t called the Green Monster then. Everything was in black and white, as you can see from the photos, and besides it was covered with ads. There’s a red seat in the stands marking the longest ball ever hit in Fenway. Ted Williams was robbed. That ball would have gone even farther if the guy in the seat hadn’t gotten his noggin in its way.

In 1975 I lived in Boston but watched the World Series on television, Red Sox vs. the Cincinnati Reds. 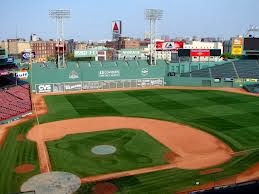 But you could hear the roar of the crowd through every window in town. We were all hooked up to the same nervous system. The next year, because our suffering was not pure enough, we were threatened with modernity in the form of a fancy-pants electronic scoreboard. We picketed. Our dog had a sandwich board that read “if I could reach it, I’d piss on it.” He was a very charismatic dog, and the board is still old-school.

There are a couple hundred reasons baseball is cooler than every other game, and one of them is the screwiness of the ball parks. We don’t need no stinkin’ yard lines, or meter lines either. This ain’t soccer, and we don’t play in a box. Our fields are laid out with the precision of a man shrugging himself some room in a beanbag chair.  The idiosyncrasies appeal to Americans. We like to be different in ways that don’t necessarily make sense. It’s why we don’t have the metric system or universal health care. Would Robert Frost ever have had kilometers to go before he sleeps? No.

I’m on board with most of it, too. Single-payer health care can’t come soon enough, but don’t nobody touch Fenway Park.

My apologies to anyone who tripped over this post last Sunday when they weren’t ready for it. It went off prematurely–that’s what can happen when you’re really excited. I have cleaned everything up and we should be good to go now.