Ambling Along The X-Axis 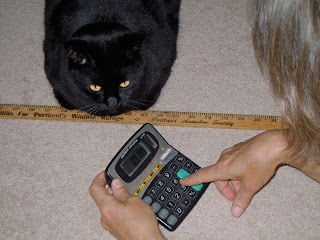 Once a week the local paper puts out some pages on the theme of Your Health, condensing the latest science news into an easily digestible form that could fit on a cereal box. This makes it simple to judge the state of your own health and your likelihood of dying, possibly in time to take evasive action.

The articles about longevity get people to sit right up and pay attention. There have been two of these recently. In the first, if I may just summarize, they think that older people who walk briskly live longer than the pokey ones. That’s it in a nutshell. The article included a graph of how fast people walk and how long they live. If you knew how fast you walked, you could trot over to the x-axis of the graph and find out when you’re due to keel over. Now, in order to find out how fast you walk, you need to know how many meters per second you travel. You need to know this because science has not advanced to the point of being able to use yards and feet. So the first thing you need to do is mark out six meters somewhere. Here in America, where we don’t have any meters, this means you need to travel to Canada or some other European country, if you have the woolens for it, and get yourself a meter stick. Make it worth your while and come back with some maple sugar and a comedian. Or maybe, being an old person, you could just ask the Canadians to pack in a meter stick when they send you the cheap drugs.

Now. Lay out a six-meter track, and then have someone start a stopwatch when you cross the starting line and mark down how many seconds it takes you to get across the finish line. You take this number and you divide by six to get your meters per second. There are no instructions for if you only have room for a five-meter track. Also, if your partner with the stopwatch is even less zippy and can’t beat you to the finish line, your results might not be accurate. Ditto if it’s another old person whose hand-eye reaction time isn’t what it used to be.

Interestingly enough, the graph showed that people my age who have a nice brisk pace can hope to live to an average age of 115. Nothing about this result caused anyone to re-check their math, and I’m holding them to it. Especially after reading the second article.

The second article claimed that a person’s tippability accurately predicts her odds of dying soon. Naturally, as an easily tipped-over woman, this caught my eye. There were a number of tests suggested to determine one’s ability to remain vertical. They all started with “stand on one foot” and escalated from there: time how long you can stand on one foot before having to put the other foot down, then do it with your eyes closed, then with your eyes closed dead drunk holding a bowling ball in one hand and a monkey in the other. I do not intend to try this. I already know I can’t stand on one foot with my eyes open for longer than a couple seconds, not even long enough to put on a sock, and that comes in way under the numbers you’re supposed to have if you expect to live into next week. 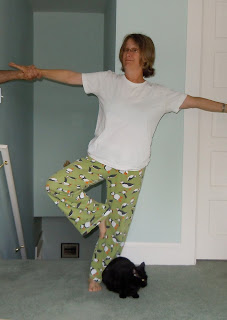 But in all these tests, it’s important to use your own judgment about the conclusions. I’ve been tipping over with regularity for 57 years now (I don’t count the first year, before someone talked me out of going on all fours) and I still feel very lifelike. I’ve learned to compensate for my wobbliness with numerous strategies. These include keeping my eyes open, standing on a minimum of two feet, marrying someone with lightning-quick reflexes, not growing too far away from the ground, and developing bounciness.

Anyway, I maintain that people are often walking briskly just before they pitch over. I suspect that if the scientists who worked up this protocol were to factor out the people who died immediately after falling down into a vat of oil or off a cliff, the morbidity numbers would come down quite a bit.

This Saturday, I will be participating in a Blog Scavenger Hunt, headed up by my friend, the splendid Pat Lichen. She will have a list of questions on her blog, the answers to which can be easily scavenged by visiting the Saturday postings of a bevy of Northwest nature bloggers, including mine. There will be a prize. And glory. It’s a bit of a stretch to include Murrmurrs among the scienterrific blogs out there; a little like interviewing the governor of Texas to find out what God wants us to do. But I hear people do that, so I guess I’m in. Be sure to tune in Saturday, and good luck!