Our friend Mike once described a mutual friend as being “so lazy, if she shit the bed she’d just roll it out with a stick.” Which puts me in mind of slug poop.

I hadn’t given much thought to slug poop in, like, ever, until I learned that certain slugs have developed a hankering for baby birds. They climb right up the tree and snarf away. No one has actually observed the slugs doing this. We infer it because baby birds have been found with debilitating slug injuries and also because the slugs leave their poop behind. Slugs poop? It’s obvious, I guess–everything poops–but somehow I never visualized slug poop. Even in an election season. 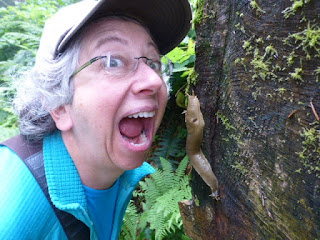 If I’m being honest, I sort of imagined slugs didn’t poop at all. Just sort of ate stuff and got bigger and bigger, like a constipated mucus ball. But poop they do.

I had to look it up. Turns out there’s more to slug poop than meets the eye, which, on the good days, it doesn’t. Slugs (or, as snails call them, “the homeless”) sometimes poop and then roll it up. Their anus and lips are very close together–nothing is that far apart on a slug–and sometimes they pull out a string of poop with their lips and poke it under their foot, and then they roll it into a ball and sleep on it. Not because they want to ponder it or anything. They’re just sleepy.

We know this because there are slug and snail aficionados who lovingly observe their pets, and pooping is one of the only things they do. It is possible that slug owners have limited social connections.

Slugs have only the one foot, and yet they do not hop. They mosey at best. But although there is not that much to a slug, they’re way more than ambulatory snot. Like us, they’re mostly water. Unlike most of us, they have every sexual organ in the book. They can even have sex with themselves. You can too, but not as spectacularly, because you’re not as well equipped, no matter what you say anonymously on the internet.

So I didn’t know what slug poop looks like, but most people really aren’t that good at poop ID. How many times have you heard a disgruntled roommate holler “Who left all this shit here?” See, they don’t know. So it’s helpful to get a good description. What does a gastropodcast look like? Is it tidy, or untoward? Well, slug poop has been described as “pretzel-shaped,” but that’s not helpful. Do they mean the curly kind? The long stick kind? The short fat peanut-butter-filled kind? We’re left in the dark. 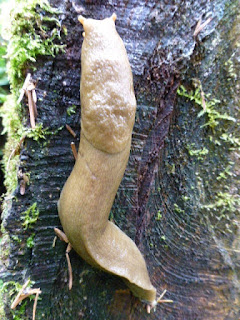 One of the other interesting things about slug poop is it’s like a little commuter bus for nematodes. Nematodes like to eat the same things slugs eat–rotting vegetation–and that is, by its nature, transitory. Once the vegetation has been eaten up, where do the nematodes go? They’re really little and can’t make time on the road the way a good slug can. So they get eaten by the slug and carted to the next good meal and pop out the other end good as new.

Yes, they get pooped out. You’d be tired too if you spent much time in a slug gut, which has a grinder in it. Scientists still don’t know if the traveling nematodes have any control over when the bus pulls out of the station, but they’re eager to find out. Yes: there are scientists who are eager to discover whether tiny worms are driving the slug poop bus. And that is why I still love humans.