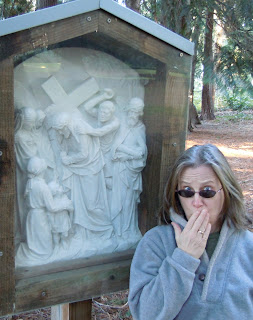 A New York man sued his local Catholic church recently after Jesus fell on his leg and mashed it up beyond repair. It wasn’t Jesus per se, but a graven image of him, and don’t say we hadn’t all been warned about that.

The man had been offering prayers at the marble crucifix for some time, hoping to persuade God to intervene on behalf of his cancer-stricken wife (the man’s, not God’s). And she recovered, and he was grateful, and offered to clean up the crucifix for the church. He tidied around it and then climbed up to wash Jesus’ face, and while he was hanging on the cross (the man, not Jesus), the sculpture, which, unlike the man, was inadequately screwed, snapped off at the base and fell  on him. His leg was amputated above the knee, and he got a lawyer.

The story fascinates me because this man and I got the same basic deal–a wafer of time–and have completely different ways of looking at it. Even if I had retained a residual habit of prayer, I would never have presumed my prayers might have that kind of influence (nevertheless not as I will, but as thou wilt). I probably wouldn’t even have sued the church. Not that the man wasn’t justified; but I’m the sort of person that won’t even send a burger back to the kitchen when I ordered spaghetti.

So the two of us are blundering through our lives with completely different manuals. His life is more orderly and comes with a pilot and operating instructions, and mine is random and chaotic and joyful. He navigates with a map and a destination and a suitcase full of credit and blame, and I bobble around at the mercy of the tides, with marvels at every crest and trough.

Because look. It turns out even space itself is full of crests and troughs, with starlight romping through it. And right here on my home planet, bright feathered dinosaurs nap in the mud and emerge 70 million years later with stories to tell.  Frozen frogs thaw out and hop away in the spring. Summertime bugs flit around with lanterns in their butts. All this is true. 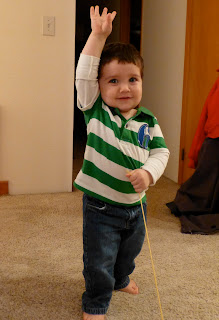 And if that weren’t enough, there also lives a toddler made out of–well you wouldn’t even believe what he was made out of, it seems so inconsequential; but he started with the most modest materials, and those materials came with instructions to go forth and divide, and in not much time at all, there was an entire boy, and here he stands before me on sturdy legs and crinkles his face at me and calls me Aunt Muh. It’s a small face with nothing scribbled on it yet, not judgment or guile, but it’s powerful enough to erase my stained past and replace it with a supple, rolling present. 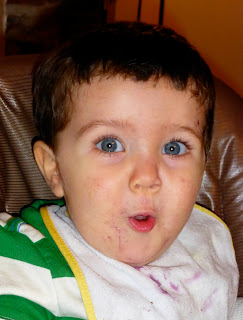 Even if I believed the universe had an office in charge of customer satisfaction, which I don’t, I would not suppose that my life comes with any kind of warranty. And yet I assume (why not?) that I will live a long time, by human standards, and drift painlessly into oblivion at the end of it. That may not happen, and even if it does, I know I’m on the downward slope and the decades are picking up speed. But what a fortune is mine: I got a ticket on this ride. And so, for the tides of space, and the fireflies, and the little boy, and the astonishment at it all; for all of this, I pray (why not?) that when my last thought drops out of me like a petal into the sea, it will be: thank you.