And A Happy Epiphany To You 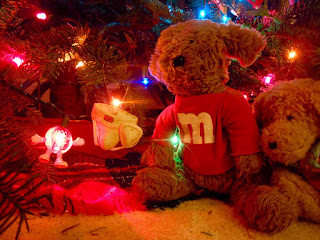 I never know if we’re going to get a Christmas tree at all. It’s up to Pootie, and sometimes he plays his cards pretty close to the vest. This year I really thought we were going to get away with no tree. That would have been fine with me. We’ve stripped Christmas way down. I’ve gone from making a dozen presents, at 15-60 hours labor per each, to Nobody Gets Presents. I’ve got my time spent on Christmas cards down from about fifty hours to about fifteen. Now we put on carols for a couple days and eat extra chocolate and one year we had a special beer at ten o’clock Christmas morning, and that’s about it. 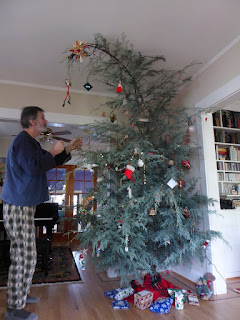 Besides, if we averaged last year’s tree with No Tree, it would come out to a normal-sized tree. Last year’s tree was five feet taller than our ceiling. Other people, standard-issue people who are neither too tall to see what’s on the bottom shelf nor too short to change the light bulb, might think that means the tree didn’t fit, but we’re accustomed to making things work around here. We’re not a matched set, ourselves.

The only thing our trees have in common is us. We’ve had tiny little ones and great big ones and once we stapled a huge branch to the wall. We don’t have what you’d call a tradition. Not like my niece Elizabeth. Elizabeth’s mom always put up the tree on Christmas Eve and not a minute earlier, and they’d spend the evening decorating it. It was big and fat. You’d just sort of push the ornaments into it. She had gobs of antique ornaments. I think it was because her own dad was an admiral and lived all over the world, and maybe he had dirt on some oligarchs. So maybe some of the ornaments started out as hair pins for the Romanov girls. Or were made by Currier for Ives. Or lived in Mata Hari’s navel. I don’t know. They’re fancy. They’d decorate until bedtime and then Elizabeth would wake up at two in the morning and come down and open all her presents and that’s where the grownups would find her come daylight, sitting happily in a mound of wrapping paper and toys without a single regret. And now the ornaments have all been passed down to her, and she continues the big fat Christmas Eve tree tradition. 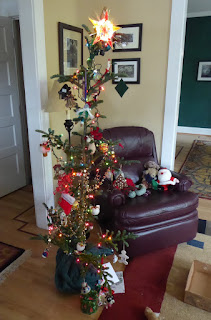 Meanwhile, across town, Dave kept asking if Pootie wanted a tree this year, and I kept saying hell if I know why don’t you ask him, and sure enough, finally, late on Christmas Eve, Dave let on that Pootie did want a tree after all, now that it was 33 degrees, dark, and raining sideways. You’d think you could get a bargain in those conditions, but no. Evidently, there was a Christmas Tree shortage this year. I’m not sure how that happens, inasmuch as almost everybody knows when to expect Christmas, but it did. And we’re in a Christmas Tree producing state. That’s what we got: trees and hops and hazelnuts. It beats coal.

It IS a noble fir. My favorite kind. They’re stout and sparse. You can hang bowling balls from them and they don’t even shrug. We stuck it in a concrete block and jammed a towel around it, and Pootie and Dave did the decorating with Pootie’s own ornament collection, which owes more to the Dollar Store than the Romanovs.

I do know it comes down on Epiphany. Epiphany is the day on the religious calendar commemorating the moment Mary told Joseph that she didn’t care what else he was planning to do, the damn tree was coming down now. I guess it came to her all of a sudden.