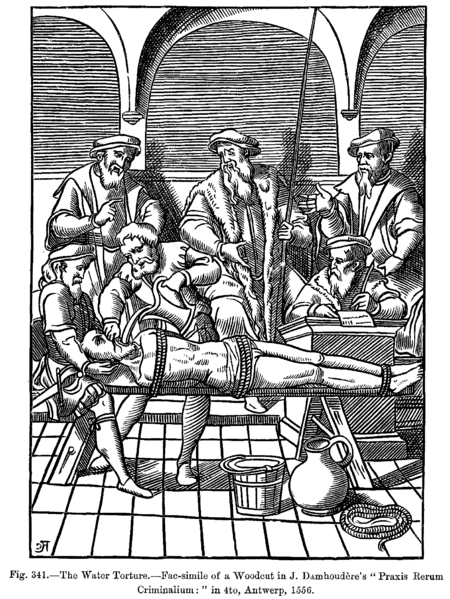 In a way, I was cheered by the release of the Senate committee torture report, because I already figured we were guilty, but I didn’t necessarily expect us to own up. And the fact that we did gave me some hope that we might be a worthy nation after all.

If there is anything that makes America exceptional, it should be our devotion to civil liberties, our founding principles, our respect for the rule of law, even international law–hell, this being one tiny marble we’re on, especially international law–and our unwillingness to compromise our ethics to satisfy our bloodlust.

You don’t have to hang out too long on the internet to find out that that is not a universal perspective. There are a lot of dark alleys on the internet and a lot of people with shivs crouched behind every dumpster. I don’t know how anyone could contemplate torture with anything but revulsion, but people do. Some people get little patriotic woodies over it. I don’t know what has happened to people who can imagine torturing other people without getting sick. Lots of things, probably. They’ve been broken somehow, hurt, probably early on. They’ve had to protect themselves from something or other–even something as ordinary as inconsistent love–since they were children, and they have racked up years maintaining enemy lists, sharpening their blades, figuring out which side of their shield everyone falls on.

They’re pissed at the store clerk with a perceived attitude, the friend who all but called them fat, the women who don’t think they’re good enough, the nigger who got promoted to the job they should have had, the man who can’t be bothered to pick up his own damn underwear, the asshole on the phone who can’t even speak English. They’re pissed and the only thing that makes sense of everything is to have a clear line drawn, and a clear shot at the ones on the wrong side of it.

They’ve got the patter and the script. They’re energized by the Real New Jersey Housewife with her hands on her hips and a head-waggle who says she gon’ cut that bitch. Fuck yeah, sister. Give ‘er one for me.

Some of them have drawn their line clear up to Heaven. American Exceptionalism? We are God’s chosen people. And since we are God’s chosen people, everything we do must be what God had in mind. If they behead one of us, we’ll slice up their whole family. I would prefer to think a true moral high ground might make us exceptional, but if it’s just that God gave us the stamp of approval one inattentive day, so be it. There are echoes of that brand of confidence all over the world, in every dark alley.

People think if we’re not strong, if we’re not cruel, we’ll be run over. That’s what those who are devoted to vengeance believe: that the rest of us are pushovers, pansies, naifs who think we can prevail with purity of heart and a good drum circle. Peacemaking is hard work and takes a lot of patience and fortitude, and there’s never a guarantee of success. The latter is what it has in common with war. What no one bothers to show is any reliable outcome from war and violence other than more war and violence. There’s no good evidence that it’s ever done us any lasting good. How can you bomb innocent people and win anything worth having? Does it really matter if our hearts were pure and we didn’t mean to take out your wedding party, or your whole village?

One fellow I eavesdropped on in an internet thread said he “didn’t feel sorry for those people”–the terrorists, or their innocent human stand-ins swept up in the dragnet, whom we tortured. No one is asking anyone to feel sorry for a terrorist. That’s not to say it would not be a good exercise to try. To try to imagine that everyone is human and hurt and something like ourselves. In the case of those actual terrorists we torture, a lot like ourselves.