And On The Eighth Day, God Created Assholes 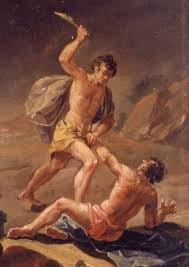 We concluded in our previous post that Cain and Abel must have banged their own sisters, because we couldn’t even entertain the possibility that their mother Eve was involved. We are delicate that way. But the question of how that population ball got rolling isn’t actually answered anywhere in what people persist in calling the Good Book.

In fact, the Book was originally devoid of punctuation, and consequently the plot lurches along without coherence. There are Gaps. If we want to fill in those gaps, we have to guess. And guess what? People of legitimate religious credentials have been guessing for centuries. With apologies to my Jewish friends, I never heard of Midrash before this week and still don’t know how to use it in a sentence, but I love it. Midrash is sort of a Cliff’s Notes for the Torah, supplementary material designed to be clipped to the scroll to explain all the bits that clearly got left out. Early rabbis wrote it and some even supplied conflicting stories for the same gaps, and that’s just fine with everybody. After a lifetime of having Jehovah’s Witnesses come to the door jabbing their confident fingers at the Scriptures, I love a religion that doesn’t get all precious about God’s Word. “Could be this,” one rabbi says, and the next comes along and says “Or that,” and nobody comes to blows. Speaking of coming to blows, that’s one of the gaps that got filled in. Cain slew Abel but it’s not clear why.

The only thing Genesis said was that Abel was a shepherd and Cain tilled the soil, and when they both brought offerings to the Lord, the Lord favored Abel’s over Cain’s. But you’ve got to expect that when you bring a vegetarian dish to a potluck. Doesn’t seem like a murder situation, though, and in fact many scholars point out that there might have been quite some time between the hummus and the homicide. And the Midrashim offer us some possibilities.

Apparently it’s just understood that Cain and Abel were each born with a twin sister, because why not? It’s not like such a non-event as the incidental birth of a girl would rate a line in the Torah. And each was supposed to marry the other’s twin, out of some very early notion of decency, but Cain’s twin was purtier than Abel’s, and they both wanted her. Or, alternately, Abel had two twin sisters, and they decided to fight over the spare.

Or, postulates a different rabbi, Cain and Abel decided to divvy up the world, and one took the land and the other took everything else. And in the course of a standard double tantrum, the one told the other to get off his land, and the other told him to take off his clothes. “Strip!” demands brother one, and “Fly!” retorts brother two, and before you knew it, that was that. The first murder.

But when God confronted Cain about this, demanding to know where Abel was, as if he didn’t know, Cain complained that he was not his brother’s keeper. Especially now that he was dead on the ground. Fine. That’s all in the book. But it gets punched up in the Midrash. Cain starts deflecting right away. He says to God it’s your fault because you made me do evil, and why didn’t you prevent it? Awesome. Typical abuser turning the blame around. I guess it works if you’re accusing the Democrats of your own racism, but it’s pretty bold to think you can gaslight God.

I don’t know. The Midrashim all ring true. One way or the other, the women don’t get a say about anything, and the men are obligate assholes, and cause all the trouble, and then blame someone else for it. Nothing’s changed to this day.