And You Don’t Have To Bimbo It 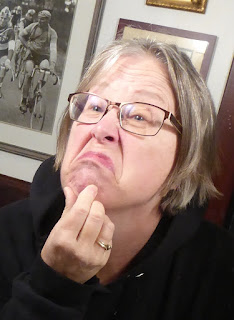 One fortunate consequence of not photo-editing pictures of myself on Facebook is that I see a lot of fun ads for how to fix what obviously ails me.

Nikoro is only the most recent. By appearances, Nikoro is a gold razor, and the video in the ad shows someone raking it all over the face, hard: forehead, temples, you name it. And whereas I do have a nice cover crop of facial hair going, the only hairs I actually wouldn’t miss are the ones with measurable diameters. I can’t remember when the Legacy Hair on my chin first sprouted, but next time I yank it out I’ll try to remember to count the rings.

Nikoro is, however, upon further exploration, not a razor at all. Instead it’s a metal wand on a stick that you push all over your face to urge it into a state of immaturity. It employs microaggressions or something. Oh, and also it vibrates. The purveyors of Nikoro recommend you apply their vibrating non-razor anywhere you like. Marketing! 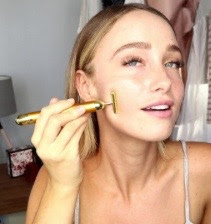 According to the website, it has been designed for women who want to reduce their wrinkles or who have drooping skin, face, neck, or chest. I’m not certain what the golden wand is likely to do for my drooping chest but I’m pretty sure I can carry a half dozen of them under each side with nobody the wiser.

This will not be necessary, however, because the Nikoro also comes with an accessory black velvet pocket “to take it everywhere with you, in your handbag for example, without having to bimbo it.” Which is an obscure relief.

The Nikoro, if used to massage the upper chest area, is claimed to revive the Cooper’s Ligaments. Cooper’s Ligaments (a.k.a. “God’s Bra”) are a cage-like assemblage of supporting tissue that holds the breast in an ideal state of pertness. They were named after surgeon Sir Astley “Hands” Cooper, who discovered them repeatedly for several years in the 19th century.

Whereas it might be possible to revive Cooper’s Ligaments, mine are not dead, but only retired. If anything, they’re taking a nap and should not be disturbed.

The Nikoro is advertised as a lower-cost home facial improvement product utilizing the extremely ancient massage technique known as “Kibodo.” This age defying technique was pioneered by two 540-year-old practitioners, who oughta know. It is said they originally clashed over a demonstration of “Kyoku-te,” a facial treatment performed with percussion using the folded hand. (In this country, the facial percussion with the folded hand is carried out by Guido, and it does plump the tissues.)

It is recommended that you start your treatments as soon as possible after age 30 so as to ward off the worst of the aging process. These are your prime beauty-treatment-purchasing years, and if you wait too long, there is a significant commercial danger you will become too old to give a shit.

And if you wait until you’re my age, that thing is just going to leave tracks on your face like a vacuum cleaner.