Another Place The Shoe Fits 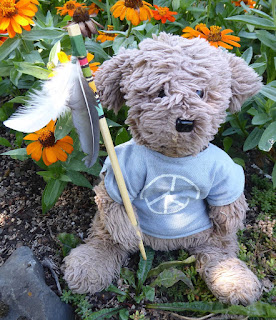 The country is being ripped apart by hatred, so Republican strategists have rolled out a new initiative: I Know You Are, But What Am I? And that is why we Democrats and liberals are now being called racists. Because we persist in calling everybody racist.

Except, Sugar? It’s not true. We only call racists racists. It just seems like everybody, these days. Believe me, we’re not happy about that. Nobody’s “playing the race card.” Even though it’s, ah, a trump card. Our problem is that our whole deck is full of those shitty cards. We would be so happy if the pit boss would come along and swap out that deck, but we can only play with what we got. And what we got here living among us is a shit-ton of racists.

And a lot of them are accusing us liberals of trying to sow division and hatred by calling our President and his supporters hateful names. Why, they even say we want a civil war!

Yeah, no. No we the hell don’t. We aren’t even armed. What are we going to do, whack you with our Talking Stick? (Because that is an improper use of a Talking Stick.)

Yes. We’re scared of you. Because you’re scared of everyone else. Y’all are frankly terrifying in all your fear. We’re not inclined to violence and we got nothing in our tool bucket to make you go away, but if something were to happen and you were gone, we’d be relieved. Some quick, tidy, painless thing. Maybe the Rapture. Oh praise the Lord, let it come, so the rest of us Americans, in all our splendid variety, can continue on in peace without you.

The only bright spot in all of this is that apparently, at this writing, people still consider it a bad thing to be called a racist. Ain’t that quaint? They have no problem being racist but they don’t want to wear the T-shirt. Despite a nearly complete inability among many white people to imagine a person of color, other than Morgan Freeman, as entirely human, they do not want to be called racists. They’re fine with people of color existing as long as they do it quietly and far away. 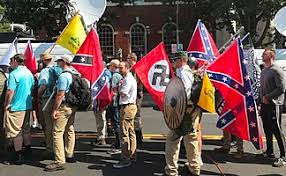 We’re not racists, they say. It’s not racist to call out people who knock over liquor stores and break into houses and sit around all day drinking Colt 45 and collect welfare checks and food stamps, and it’s not our fault if all of those people happen to be black. They’re either guilty or they look just like someone who is, so it’s no wonder the police give ’em an extra thump just to make sure. You can’t blame the police for that. And it’s not our fault so many of those people are in prison, because they wouldn’t be there if they didn’t deserve to be.


And Muslims. There is no reason to wear the hijab if you’re not trying to hide a bomb. Those people are dedicated to enshrining Sharia law in America and outlawing Christianity, and our own God and Constitution are not strong enough to withstand a threat like that. It’s not racist to sound the alarm about those people if it’s true. It’s just standing up for what we believe in. You know. Freedom. 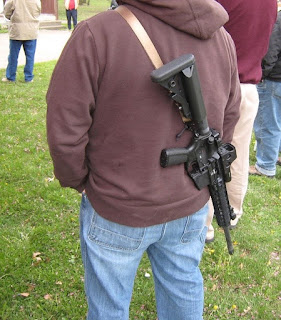 And don’t tell us those “refugees” at the border aren’t a threat. A good parent feeds and clothes her child and makes sure she goes to school. You sure as hell don’t march your little kid across a thousand miles of desert to sneak into a better country and steal someone else’s job. What kind of monster would be that cruel? Fix your own damn country, that’s what a good parent would do. My God. So obvious. These are not good people. It’s not racist to say so, if it’s a fact.


Thieves and terrorists and drug dealers don’t belong here. It’s not our fault that we can tell who they are just by looking.


Well bless my buttons. What happened to the Home of the Brave? I don’t understand much of this. I don’t know why folks who are proud to sling rifles over their fat butts in the town square are so damned afraid of so many powerless people.

But I did just think of a good place to store my Talking Stick.


As this post rolls out at 3am PST, Portland is, reluctantly, about to host a swarm of right-wing provocateurs from across the nation. Many of them haven’t been laid in a long time and they’re very interested in exercising themselves violently. They are likely to find willing foils on the left here, and they know it. Ordinarily, I like to attend these events to witness and to point and laugh (as appropriate). I’m skipping this one. I don’t actually want to die yet. Wish us luck.