Are You A Friend Of Pootie? 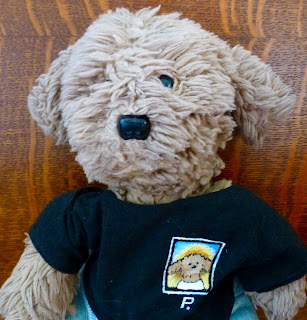 The original Starbucks logo was similar to the current version, except the mermaid had titties. This goes way back to 1971. It took Starbucks a while to get off the ground, and it’s probably because of the titties. People were disappointed to find that coffee was what was on the menu, and not titties.

Mind you, she still has them. They are implied by the curves of her hair, and all the more powerful for that, because they force the brain to do the work of imagining them. The brain can dawdle at its task as long as it wants. It’s the same reason reading a book is more engaging than watching a movie. The brain gets to construct the scenery. In the case of the Starbucks logo, it gets to leave some of the scaffolding up, and you’re that much more readily drawn into the next Starbucks as it appears, which could be as soon as a half block away.  It’s the power of the logo. Also, they sell drugs. 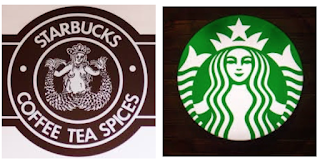 The logo is also brilliant because unlike your average mermaid, all enticement up above and frustration below, this one has a forked tail, and moreover, she obviously has it all spread apart for you. There’s your coffee with cream, right there.

The latest iteration of the Starbucks logo assumes we all have our implied delight firmly in place in our heads, and leaves out the “Starbucks” wordage. It signals that the company has arrived, and like Nike and its swoosh, it doesn’t need to spell it all out for us anymore. 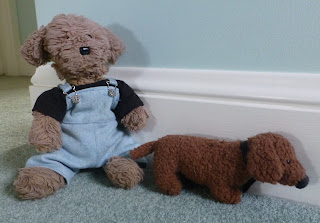 And that’s when it occurred to me that Murrmurrs really needed a logo. And we already have a dog-o. Moreover, he is an extremely handsome dog-o, and vain enough to embrace the role. Pootie is an interesting fellow and interested in many things, primarily being famous. He is not shy and is a natural leader. He has a number of friends, all of whom have accepted a subservient role. Scooter is typical. Scooter is a perfectly fine wiener dog, but when he arrived here from the Arfnage he was immediately drafted into one of Pootie’s many enterprises, being the entire workforce of Poot ‘N’ Scoot Janitorial Services, a baseboard-cleaning outfit that accepts payment in M&Ms. Scooter does 100% of the work involved, but Pootie, as he points out, is the brains of the operation, and keeps all the M&Ms. We’re not certain Pootie is a Democrat. But anyway, Scooter is just fine with this role, as long as he gets to call himself a Friend Of Pootie, and that’s the way the rest of us feel, too. 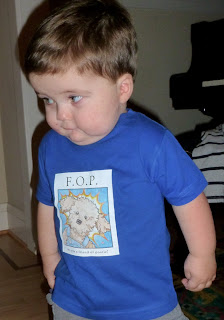 There are already several hand-painted shirts out there emblazoned with Pootie’s handsome mug and F.O.P. above. There is a Pootie Fan Club whose benefits include (all right, it’s the only benefit) a laminated membership card. And now, since the Poot had been gracious enough to grace the screen here for lo these many years (seven), we here at Murrmurrs, Inc. would like to give anyone the chance to become an official Friend Of Pootie. Yes. There are T-shirts. We here at Murrmurrs, Inc. are going to begin with the proposition that we have arrived, even though we haven’t, and leave out all mention of Murrmurrs. 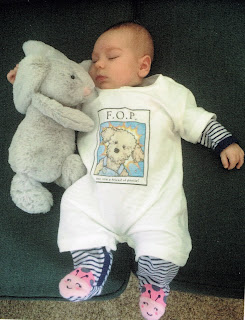 So are you a Friend Of Pootie? Order an F.O.P. shirt in any style or color and soon you’ll be rockin’ the Poot. If you want a dark shirt, click here. For a snazzy white, click here. There are tons of options. Please supply your own head. 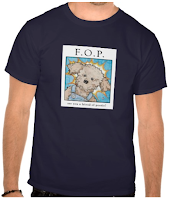 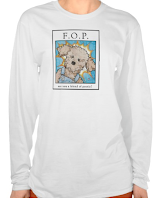