As Long As You’re Peeing Anyway 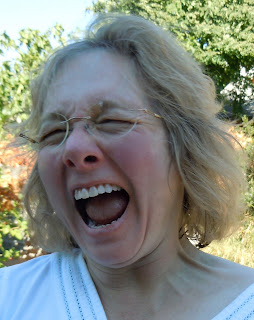 I was in the Convention Center the other day and went to the restroom to pee and there, near my left foot, was a big black spider. The rest of the women in the room were very lucky, although they didn’t know it, that it was me in that stall and not my friend Casey. If Casey is startled by a spider, or, frankly, if there’s one anywhere within the county lines, she will emit a shriek that could be used to evacuate an entire town. She can’t help it. She’s like most of the rest of us, only way louder. I’ve heard this shriek a few times, and it is not possible to hear it without suffering a little urine leakage. So I guess if you’re going to find an indoor spider, the restroom is probably not the worst place to be. 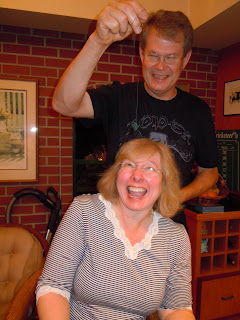 My friend is a calm, competent, multi-tasking wonder of a woman with freakish self-control, but she is undone by spiders. Her husband, early on in our friendship, demonstrated The Shriek for us by bringing in a dangling spider and passing it briefly in front of her face. He wanted us to see what he had to contend with. It was impressive. Scared the silk right out of the poor spider, who bobbed along the ground like underwear with sprung elastic. The shriek was followed by a thunking sound. That was the sound of months of our lives being sheared off.

A lot of people have a problem with spiders. I don’t. I think they’re interesting and most of them are beautiful, and as long as they’re not in bed with me I’m happy to leave them be. I do have a little problem with snakes. Not prepared-for snakes, which are handsome and silky, but snakes with insufficient signage. A properly announced snake is a delight. I react strongly to sudden snakes, however, and also feel that they do not belong in the water or in trees. 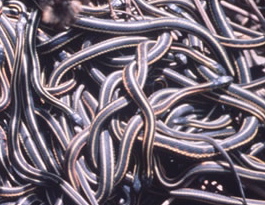 One day on my mail route years ago I stepped in the epicenter of a nest of baby garter snakes, a hundred of them, and they all slithered out at once on every possible radius. All I could see was movement, movement totally inappropriate for a solid patch of ground, as though I had stepped in a black hole. In case you want to know what it feels like to step in a black hole, well, it’s zero to intestinal-flu in point-five seconds, followed by a generalized internal liquefaction. Aftershocks of the willies continue regular as malaria for–well, I’ll have to get back to you as to when they stop. 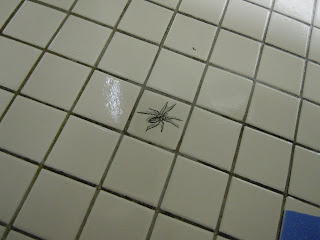 The reactions to spiders and snakes are probably hard-wired into us at this point in our evolution. The parasympathetic nervous system comes into play and floods us with adrenaline to prepare us for either fight or flight, or, as the case may be, just standing there leaking urine.  It was originally developed to help us deal with tigers. We use it to this day in preparing for a bout of public speaking, in case there’s a tiger.

As it turns out, the spider at the Convention Center was glazed right into the tile floor of the restroom. It wasn’t real at all. Ha ha, you wacky city employees! What an artistic sense of humor you have! You are truly the civic dickens, you are! I do think the ceramic toilet rat was a bit much.