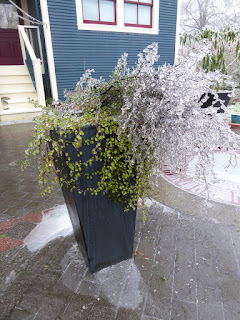 I didn’t have a car when I lived in New England. So all my winter driving experience has been here in Portland, and what a fuck of a lot of fun that has been over the years! Oh those wacky postal Jeeps with their bald tires and engines tuned up to idle at 7000 RPMs! Ha ha! Who can forget that day I inched my Jeep over the crest of a steep driveway and slid toward a parked car? What a hoot. Finally got ‘er stopped a few feet short with my wheels cranked away from the car, and a nice gentleman tapped on my window and said if I got off the brake I’d be just fine; why, I’d straighten right out; there might be an issue stopping at the bottom where it spills into the four-lane highway that you couldn’t see because of the wall, but “there’s not much traffic out today, you’ll probably be just fine,” said he, and I kept my foot on the brake intending to hold it there until the ice melted, and finally let go and plummeted into the highway sideways with my screams going full Doppler all the way. Memories! 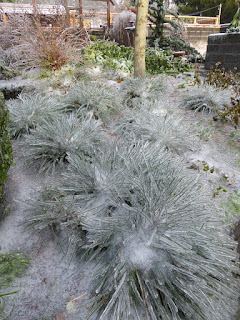 I was not here, however, but in Maine, in a raging five-degree snowstorm, the night I had to go to the airport 70 miles away, and there sat Margaret’s little Honda at my disposal in the driveway, with no accompanying set of chains in sight or in existence, and I checked in with my friend Jon who assured me I’d be just fine, and I grabbed some beer and emergency underpants and off I went, flying down the highway in the blizzard, and I will be go-to-hell if that road wasn’t as grippy as a packed-sand beach.  I even tried to skid on purpose and failed. I could not have been more confident if that Honda had been strapped to a conveyor belt in a donut factory and arrived at the airport filled with custard. This was easy.

This was not Portland.

It’s not just that we’re not used to it, though we’re not. It’s what “it” is. Other places, precipitation knows the drill. Rain is going to come out of the sky, or maybe snow, and it’s just a matter of when and how much. Around here we get our warm wet systems from one part of the map and our cold dry systems from a whole other part, and whenever they chance to meet they both completely lose their shit like they’ve never seen anything like this before. All the moisture goes tearing around the various thermal layers like teenagers in a stolen Trans-Am. You got your hailstones whipping around and putting on one coat after another until they’re big enough to damage raccoons. Your sleet that starts as snow and falls to rain and then freezes back up again before it reaches the ground. Your frozen rain that starts as snow and melts and re-freezes when it hits the ground. Us and our damned diversity. 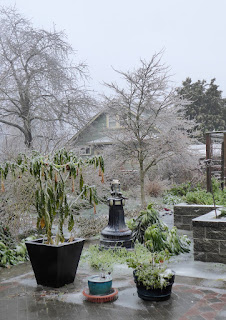 The forecasters cover their bases. Morning snow changing to intermittent crap, variable sleet, freezing rain, partly flakey, black ice, patchy snarkles, asphalt of doom. After a while they give up on the specifics and just tell us to expect a “frozen mix.”

When our last bout of weather hauled in, it looked like snow, but it was all going sideways and the flakes freaked out when they got close to the ground and screamed back up into the cloud again to sit and think about things for a while, which is never good. Terror amongst water molecules leads them to stampede around the sky in a state of thermal confusion until they’re sheared off square and plunge to earth pointy-side down. Finally something began to stick and everything looked cool for a minute, while the colluding weather systems pondered how many strata of crap to lay down and in what order. The ultimate goal here is a slick city-wide gravity detection system wherein everything from vehicles to body parts achieves its lowest elevation as fast as it possibly can. There was a yummy snow layer with an ice coating on top to seal in the juices, a thin film of motorist panic sweat, some random snarkling, and then–the piece de resistance–a cheeky deposit of julienned pre-frozen Midwesterners plucked from upturned RAV-4s and dressed in smug-sauce.

All of which resulted in splendid road conditions resembling seal snot on a polished puck, and not a packed-sand beach at all, but honey? That’s why God gave us ditches.