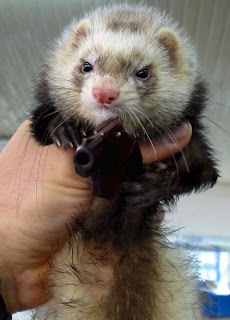 In news from Florida, a homeless man was arrested after he stuffed a ferret in his pants and ran from a pet store.

Although ferret abduction is still relatively rare, store personnel had been on the alert after a Sarasota Petco lost its entire hamster supply inside a pair of cargo pants, although in that case the thief was arrested in short order after police were able to follow a trail of hamster doots all the way to his home. The ferret felon was apprehended in the parking lot of the pet store by an alert teenager, who suffered facial injuries when the thief whipped the ferret out of his pants and brandished it at the young man. The ability to quick-draw a ferret is quite a specialized one, law enforcement officials say, and they theorize that the perpetrator had probably practiced the move (called “weaseling out” in ferret-smuggling circles) before. The assault resulted in an additional charge of ferret-wielding on top of the original theft.
In modern times we have become complacent about this sort of threat. The old stoat-totin’ days of the wild, wild West are, after all, long gone. Nevertheless there has been a rise in bat-wielding gangs, and a Montana woman recently suffered a severe nibbling at the hands of a miscreant carrying a concealed pika. 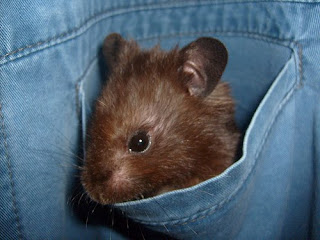 Sociologists contacted for this story agree that a predisposition towards pants-ferreting is observed early in life, with ants as the gateway animal, progressing over time to a series of small rodents and ultimately to your larger vertebrates.
It is difficult to say with certainty what the abductor had in mind. The stolen ferret was valued at $129, but authorities do not believe that a fenced hot ferret would fetch enough 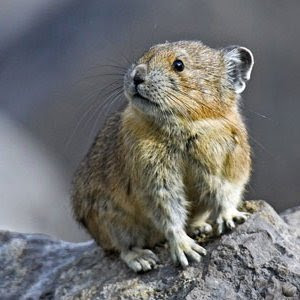 on the street to justify the considerable risk involved with trousering a weasel. Moreover, it does not seem to be the sort of crime that would go unnoticed. It is this last observation that may hold the key to the matter. A man with a ferret in his trousers may indeed be noticed, but he is rarely approached and questioned. In fact, studies show that test subjects with small mammals in their britches have a distinctly repellent effect on bystanders. The working conjecture in law enforcement is that a homeless man thus equipped would, nine times out of ten, be able to board a bus without paying fare, as well as getting an entire bench seat to himself.

In related news, the Obama administration today denied allegations by the group “Gophers, Guts And Glory” that it plans to confiscate weasels used for personal defense. “Jeez Louise,” Mr. Obama was heard to say off-mike, whereupon a spokesman for the President assured correspondents for Fox News that he was not angry, nor taking a tone.
By Murr Brewster|2021-11-09T21:32:00-08:00November 21, 2009|Uncategorized|5 Comments