At Last, A Cure For Adult Onset Panty Despoilment 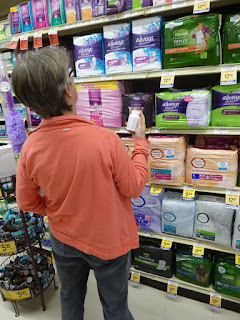 I get my most reliable medical information from the full-page spreads in the newspaper that say “Paid Advertisement” at the top. You should never trust an advertisement that’s purchased on credit. This recent one caught my eye:

Pills May Replace Diapers And Padded Underwear At Stores


This is an exciting development, although I’d think it would have to be a really large, spongey pill. The pill in question is called UriVarx and according to the ad it “contains ingredients that keeps the bladder from releasing voluntarily.” There’s no further explanation, so I assume the pill, with its ingredients, gets lodged in the exit hole of the bladder. I do have some limited acquaintance with Adult Onset Panty Despoilment and despite the difficulties the condition presents, I would prefer–call me a urinary libertarian–to maintain my bladder’s ability to release voluntarily. But corking the sucker up altogether might be an attractive option in the short run.

According to WebMD, the main symptom of urinary incontinence is involuntary release of urine from the bladder. (Similarly, nausea is characterized by a barfy feeling.) According to the proprietor of the UriVarx ad, the unfortunately named Dr. Damaj, your bladder muscles weaken as you age. This doesn’t surprise me in the least. Judging from the condition of the muscles on the outside of me, I suspect everything inside is flapping away in there like hung laundry. 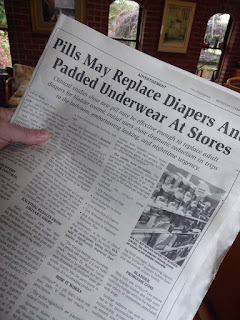 Many UriVarx users report that their bladders have never been stronger. Some of them are positively ripped. And “adult pads and diapers are no longer a worry.” This is a relief! You get a closet full of those and you never know when they’re going to turn on you. Marie L. of Danbury, CT exults that thanks to UriVarx, she is no longer living in constant fear of finding a bathroom. This is a serious concern. Those suckers are everywhere; there’s no getting away from them.

Furthermore, “research shows that as we get older, the muscles which surround the bladder weaken. This is caused by hormonal changes in the body that causes the muscles to weaken.” This brings to mind several questions:

(1) Are the muscles that surround the bladder supposed to be intimidating?

(2) Are there any good money in pharmaceutical advertisement editing?

Coincidentally, another full-page ad two pages later also featured the pioneering work of Dr. Damaj. “Apeaz” (pronounced either Appease or Ape-Ass) is an arthritis painkilling cream. Its “powerful effect is created by the cream’s active ingredient, a special medical compound.” Even better, every container of Apeaz comes with a breakthrough pill named ArthriVarx, which also contains special compounds.

ArthriVarx is probably related to UriVarx. I’m holding out for AardiVarx, which has been shown to cure ants. Or its predecessor ArchaeoVarx, with its key stomping ingredients and tiny little arms. You rub it on Jurassic.