The Attack Of The Bean Tree 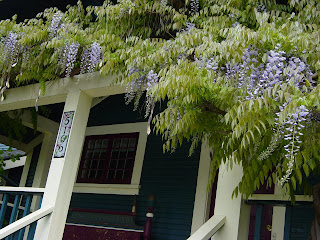 You think you know a lot about life, and then something zings by your ear and smacks you right in the Toyota.

I bought a house in 1978 and have been rattling around in it ever since. One of the things that I thought was really cool about it was that it had a big wisteria clambering all over the front porch. Nothing could have been more romantic. It was all leafed out when I bought it but I looked forward, the next spring, to having Louis Tiffany-worthy pendulous blooms bursting across what would surely, then, be termed a veranda. Mind Juleps would be poured; I would call everybody “dahling.” My sister Bobbie celebrated my new house by making me a lovely needlepoint of the house in the original colors of sandalwood and red; she included, gratis, a profusion of wisteria blossoms.

The next spring the vine leafed out solidly and there, somewhere in the foliage, hung one straggly clump of purple flowers. Our porch remained a porch and we had beers on it. The next year the plucky purple clump returned. It perished of loneliness. A decade went by without another flower. We repainted the house. Bobbie soldiered forth with another needlepoint, in grey and charcoal and red, with a bushy yet barren wisteria vine in the front.

What the vine lacked in beauty it made up for in sheer malicious vigor. My little prunings were insufficient. Turn your back on the sucker and it’s up under the roof shingles, twining around the neighbor’s cat and sizing up the meter reader. Dave declared me unworthy of the task and tackled it himself. He called it a good pruning but it was closer to murder.

The next spring we had dozens of blooms. The next, dozens more yet. Before long, we had a perfectly creditable spring display–not really prizeworthy, it not being a stellar variety of wisteria, but uplifting nonetheless. We sat on the porch with beers and called each other “dahling.” We added onto the house, repainted, and were informed that there would be no more needlepoints coming.

When the wisteria finishes blooming, it produces long fuzzy beans that are decorative in themselves, and they remain until the next spring. These are the “bean trees” of Barbara Kingsolver’s imagination. One afternoon in March a few years back, I sat out on the front steps to enjoy an unusually w 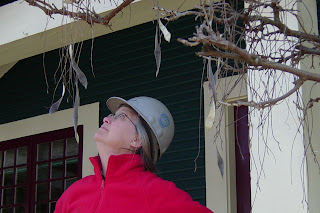 arm day. Zzzing: BAM. It sounded like a gunshot, which wasn’t without precedent in this neighborhood. I couldn’t tell where it was coming from but it shot my car. Zzing: WHACK. What the hell? I took cover behind the garbage can. War veterans reflexively hit the ground. The bean tree was exploding. The next few seeds made it all the way across the street and hammered on the neighbor’s SUV. Then one took out a passing Pomeranian at thirty paces. An empty half-helix is all that remained of every bean on the vine. And we’d never noticed it before because they all went off at once. If you aren’t there that day, you miss the whole show. It’s a lot safer that way.

Next unusually warm day in March, bring your hard hat and come one over. I recommend parking around the corner.