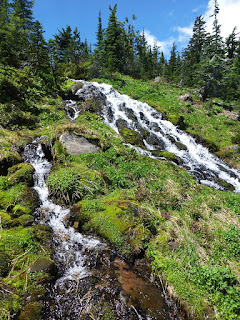 Sometimes I sit by a stream and wonder why it keeps going. Shouldn’t it be possible to see the end of it? Shouldn’t it be possible to watch the end of the stream go by, with a little floopity noise, and leave dust in its wake? After all, it happened to the mighty Colorado River, which now slouches along and gets dwindly and peters out into a damp spot miles from the ocean.

Which is not a great development. A couple years ago someone stood on a nice bridge across the Sandy River on Mt. Hood and must have noticed that the river was missing, and leaned on the railing to contemplate its goneness. It had just hidden behind a jumble of ice, and when that broke through, the river turned back on, bigger and deeper than ever, and took the whole bridge, and the unfortunate hiker, with it. He was found a couple miles downstream, and not in operating condition.

Similarly, I am led to understand that if you’re contemplating the ocean, with its endless tide rolling in, and it suddenly disappears, you should run like bloody hell, uphill.

Well, this is practical advice. But I think about disappearing streams more often than most. Because I have been putting out this seemingly endless stream of crap here on Murrmurrs for over seven years without missing a single Wednesday or Saturday, and I still get in a panic about it. I rarely write to a deadline or anything: I have a stash. But I still understand that if I do not resupply my stash with an average of two a week, that stream is going to turn into a damp spot. I feel great if I write two a week, giddy if I write three, and there’s a big shadow over me if I only manage one. Oh no, I think. It’s over. 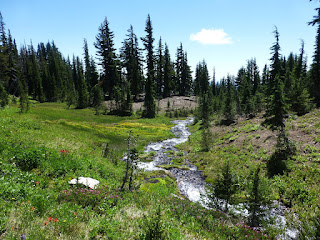 It’s not that I worry my muse will go on strike. I don’t have a muse. I have a running conversation going in my head in which at least one participant is funny. And I trip across headlines like “Non-Profit Collecting Used Bras To Send To Developing Countries.” Then it’s just a matter of sitting down and transcribing the conversation. But sometimes that doesn’t happen. Sometimes there’s nothing in there at all. Just the whisper of tumbling lint, same as Pootie.

But, by some miracle, we’ve arrived at this point with this post, which is my 800th. And I have to remind myself that just this last spring I sat on the porch with a beer, next to a piece of dog shit, and realized I could write a whole blog post about sitting next to a piece of dog shit. It’s officially time to quit worrying about it all. We can worry about quality control, but that’s it.