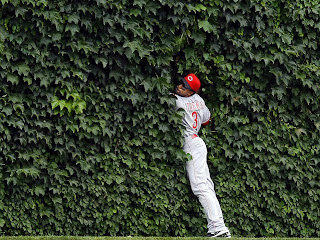 Well, there are other ball parks besides Fenway. I’m told.

Wrigley Field is a charming example. It was next up after Fenway and promptly installed quirks of its own. It’s got scalloped edges and an extra chunk in right field, and it’s all hugged by a brick wall covered with ivy that can actually eat baseballs. The fielder gets to decide if he’s going in there after one or just holding up his arms for a ground-rule double like a big pussy. Sticking with the theme of being bollixed up by Nature, the park is sited next to a howling and properly quirky wind off Lake Michigan. In a nod to Wrigley tradition, Candlestick Park was later situated in a perpetual hurricane. Denver’s Coors Field one-upped them all by removing most of the air altogether.

Fenway and Wrigley are the only survivors of those days; the newest currently occupied park didn’t show up for another 52 years. The old Yankee Stadium is gone now, too. Yankee Stadium, the House That Ruth Built After The Sumbitch Left Boston, was suitably lumpy. Not only that, there were three large stone monuments to star players parked right out in center field that players had to negotiate around. Serial nutcase Jimmy Piersall once hid behind the monuments during a game to have a word with Babe Ruth’s ghost, but Babe Ruth’s ghost was drunk. The stadium was renovated between 1973-1975 during which time the Yankees had to share the Mets’ stadium, leading to confusion over who had the home-field advantage (uh, it’s always the Yankees). Then the old stadium was retired in 2009 and replaced by a new one next door. The famous old metal frieze that had adorned the old stadium was supposed to be stuck onto the new as a salute to history, but it had too much scrap value and somehow disappeared into the Bronx. The new stadium safely quarantines the monuments off field, features improvements that help keep the players from getting fan cooties on them, is the most expensive ball park ever built, and oh who cares.

But as Yankee did, stadiums get tatty, and new teams proliferate like fruit flies, and owners conspire to vacuum money out of taxpayers, and what with one thing and another we’ve got new ball parks coming down the pike all the time. The Houston Astros kicked it off with their Astrodome in 1965. Right off the bat, as it were, we were in trouble: the field was symmetrical. Symmetrical! It had a lid on it, and it was air-conditioned. The pitchers not only brought the heat, they brought the humidity. They took a stab at real grass but it kept steaming up the joint and so they invented fake grass and rolled that in. It was all wrong.

Other parks followed that attempted to make an indoor sport out of baseball, but eventually they started building stadiums that hearkened back to the so-called “jewel-boxes” Fenway and Wrigley: seating in mandatory forest green, red brick facades, and antique announcers. Wrigley itself underwent renovation; as the last holdout, it finally installed lighting for night games, thus signing the death warrant for the time-honored practice of playing hooky from work to watch a ball game. In keeping with tradition, however, they refused to install a winning team.

Nationals Park was the first to receive LEED certification as a green building, but given the standards for stadiums–Chase Field is air-conditioned when the roof is open–it probably just means they heat the dugouts with recycled hot dog farts. The Marlins in Miami finally broke the mold by daring to be modern. After twenty consecutive retro-style parks were built, they had a different idea. There are lime 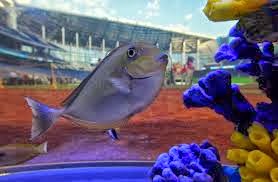 It’s not the worst idea. At least it snaps the trend to manufactured nostalgia. It’s possible to go modern without sacrificing quirkiness. I propose a park shaped like a double helix. The warning track could be a Moebius strip. Or a moat with a single roaming shark. In deep center field, a small Starbucks is in play. An ironic ukulele band replaces the organ. Let’s do it.