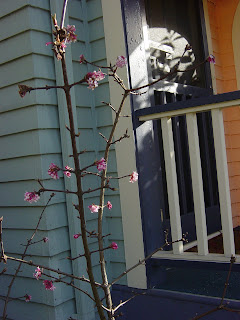 I’ve figured out a fun way to irritate the bejeesus out of my mailman. I like John a lot, and he does a fine job, but I’m in a unique position to really pull his chain. I’m a recently retired letter carrier, quite obviously satisfied with my new status, and as such, I represent simultaneously everything John wants to be, and everything he isn’t now. He’s got two years to go until he’s eligible to retire himself, and he can practically taste it. So whenever I see him, I listen sympathetically, head tilted, as he ticks off his complaints: the ice, the overtime, the big fat catalogs, the eensy-beensy political mailings that nobody wants, the Advo fliers that shed coupons with every gust of wind. I nod, brow furrowed, until he winds down; I belt my bathrobe a little tighter, peer up at the sky, and then I say: “Huh. Is this Tuesday?”

So last Monday I caught myself before I put out a letter to go, remembering it was Martin Luther King Jr. Day, and we weren’t going to get a visit from John. Dave pointed out that being retired really takes a lot of the glory out of having a holiday. And just then, following some grand celestial script, our doorbell rings. There on our porch are three little girls, and what they have to say is: “um.” They take turns saying “um” and twirl a little and scuff their feet and finally one of them launches off the verbal diving board and explains that, um, they were collecting food for the Oregon Food Bank. There were two motherly types out on the sidewalk with kiddie trailers packed with grocery bags, and another group of small children heading up the steps to my neighbor’s house. I invited the girls in while I scoured the pantry for canned goods and wrote out a check. When they left, I overheard them reporting to Mom about the tuna and the check and a whole lot about our neat cat, who had trotted out to entertain while I scrounged.

That’s what these children were doing on their holiday, a cold but brilliantly sunny day. The sun had to have been written into the screenplay along with the girls, as a metaphor for hope.

When I was about their age, I was very impressed by a Good Friday service at our church, because the sky had gotten extremely dark and menacing and at the most critical portion of the reading of the scriptures, there was a tremendous crack of thunder. In the self-centered manner of some six-year-olds and other religious people, I intuited the hand of God in this, imagining that it was thundering all over the planet on the anniversary of Our Saviour’s death. I believed this in the face of all evidence to the contrary, not that I looked for any.

But Monday, on the eve of the inauguration of a new president, I found myself squinting into the rare winter sun, as my new young friends continued down the street, and imagining that it was sunny all over the world.