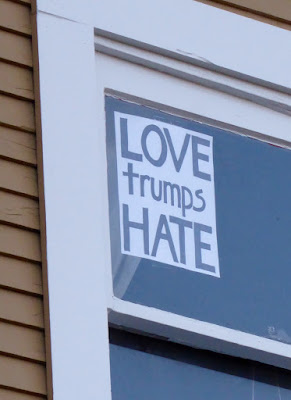 The good and beautiful people of my good and beautiful city are walking around like survivors in a blast zone. Strangers embrace. The detonation has happened and now the concussion and devastation will ripple on for a long time. I find I’m not interested in food. That’s never good.

We can all see each other now. The really, really bad people are lit up like flares. They’re celebrating in their white robes and waving their Confederate flags and terrorizing their fellow citizens in the street. Their unwitting partners–almost half the country–are not really bad people, probably. They’re just full of shit.

I don’t mean that in the normal disparaging way. I mean that a systematic propaganda apparatus has been cranking away for decades now, and its architects have concocted a poisonous stew of lies and distractions, and seasoned it with honey, and people have tipped their heads back and allowed the funnel to be placed in their mouths, and all that shit got pumped in. A party devoted only to increasing the wealth of the wealthy was rebranded as the champion of the middle class. A good, smart, hard-working woman was recast as a devil. Sound science became fantasy. Demonstrable falsehoods were propagated with glee. But folks on the left as well as the right sucked on that funnel and accepted the particular load of shit that was curated just for them. Truth is the first victim, but there are so many more. When you’ve been pumped full of shit, you actually begin to believe certain of your compatriots threaten you, when clearly those people have much more to fear from you.

Muslim citizens do not like to be mischaracterized as terrorists, nor Hispanics as criminals, and so too, Trump voters are outraged to be called racists and xenophobes. That’s not who they are! That stuff is peripheral. They had other concerns. And you know what? They’re probably telling the truth.

But the ability to filter out and discard as irrelevant the flagrant racism metastasizing all around them, and the demagogue at its epicenter, the Igniter-In-Chief, does not speak well of their capacity for empathy. To them I say: these are the people you have cast your lot with. To discount them is to reveal yourselves to be comfortably cocooned and unwilling to take a step outside your own experience and imagine someone else’s: your neighbor now afraid to wear her head-scarf to the grocery store. The gay man now second-guessing his usual route home in the dark. The Latina betrayed by her own facial features and subject to derision and terror. The black man assumed to be a gangster, and subject to execution. This is what’s happening in America today. We marginalize and dehumanize people who frighten us. Every single time we generalize about people, we’re wrong. We’re wrong, and we’re lazy, and we’re also less safe, if that is the point of the exercise. We are all far, far less safe now. 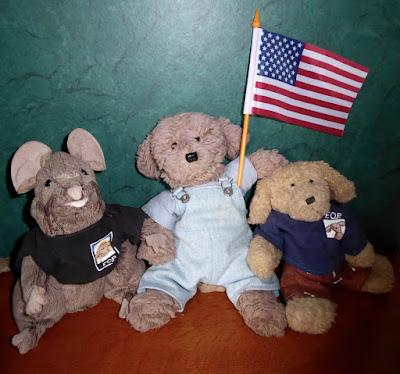 So what do we do? Deliberately, we do not have all the options embraced by some of our political foes: most of us are not armed. That’s not the way we roll. One thing we do is band together for peace. We keep our eyes and ears open, and when any of us is under attack, we stand with that person. Literally. Physically. We stand together and we give each other strength. And we reject violence.

And we mobilize. There is so much to defend: our civil rights, our health care, our environment, our standing in the world. Everything we’ve ever cared about is under attack. Everything that actually does make America great is to be dismantled. It has not escaped us that international terrorists will take this opportunity to goad our new president, an insecure, easily-bruised, childish bully, into the all-out holy war they have yearned for. They’ve got their man, now. As bad as that is, we don’t need an external enemy if we’re rotting from within.

And with all that, there are even worse things.  We are many years too late to undo the damage we’ve already done to our planet. But we must keep things from getting worse. We have to at least try. We are out of time to waste. And we can’t do it by pulling out the rest of the fossil fuel and burning it up. We have an international climate change agreement signed now–baby steps, far from adequate–but even at that, our new president wants to rip it up and drill, baby, drill. He wants to shovel ever more coal into the boiler of a runaway train. He is a simple, uninformed man: he thinks he’s creating jobs. He wants to give us full employment–as grave diggers. When we’re done we can all jump in.

We can’t let him. We need to stand, march, and holler. We need to fill the streets with our good and beautiful selves and hold each other up. Someone talked about building a wall. We need to be that wall.