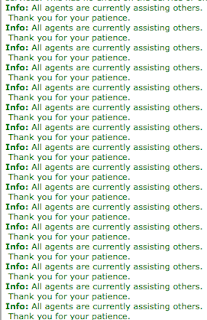 TV was on the fritz again. This happens a lot since everything went digital. It never makes sense, which means it’s probably related to hormones or some planet being in retrograde. Usually I can fix it myself with some combination of unpluggings and holdings-in-of-buttons, although the precise order is a mystery.

Sometimes, I think, it just comes back on as a sort of blessing. It’s like God. You might get the dropsy or win the Irish Lottery, but it won’t be because of anything you did.

Not this time. This time I scared up a screen that promised Software Is Being Updated, but I was dubious. The progress dots were just loitering. After about five minutes they gave way to an Error screen in big red letters. I unplugged more vehemently and jammed the plug back in like I meant it, Mister. It didn’t budge. I unplugged the toaster and the slow sink, to no avail.

Somewhere there was a suggestion I chat with someone online, so I gave it a go. First thing I see is that I’m really important and the estimated minimum wait time is 127 minutes. I kept the window open and farted around on the internet. 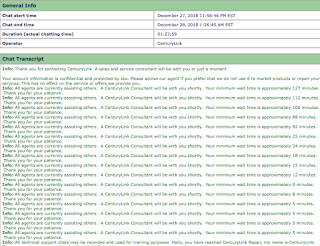 Then I got a new message! Hi! My name is CenturyLink and I’ll be with you in a moment, as soon as I figure out who you are and whether you are packing! Followed thirty seconds later by “All our agents are busy. Try again later.” 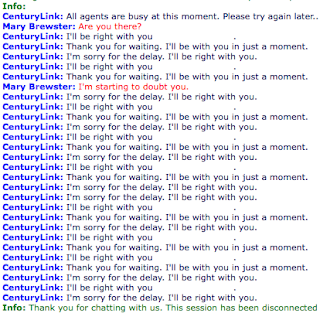 Oh, no you di’n’t. I gave the chat window a wicked bitch face and then typed in “Are you there?” To my surprise, it came back with the message that someone would be right with me, and thanked me for my patience, which I believe was rather an assumption on their part.

“I’ll be with you in a minute,” it said. That would be Nick (“The Nickster”) and his imaginary friend Nurse Skippy, who is still in the bathroom. Nick isn’t allowed to chat on his own without a nurse in the room since the Incident.

Every two minutes, I got a slightly different version of this message and then–1-1/2 hours in–the “agent” terminated the chat. Would I like a transcript of our chat? Oh yasss. Yass indeedy, I would. I’ll need it for the murder trial.

Used to be we had ourselves a fat monopoly called Ma Bell. Ma was all-powerful. She owned our phones and unless you had a postage stamp or a ham radio that was the only way you were going to communicate with anyone who wasn’t in the room. When your phone didn’t work, you went to a neighbor’s house to call Ma and she sent out a nice man in a spiffy suit to fix it, no charge. He’d come in and frown at the phone and then go outside with a loop of new line and a bulge in his pocket and come back brandishing a dispatched squirrel, either a relevant one or an alternate that happened to be in the wrong place at the wrong time. Then your phone worked again.

We used to complain about Ma Bell. I don’t remember why.