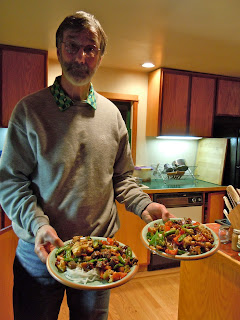 Like a lot of guys, Dave used to have trouble coming up with something special to do for me for Valentine’s Day, and mostly he didn’t bother. He had the usual problem: what do you do for a woman when you already cook delicious meals every day, do the laundry, clean the house, muck out the toilets, lift heavy things, take out a wall so her new piano will fit in, and forgive her cribbage debts? Or pack away meals in the freezer, complete with instructions, when you’re going away for a while, so she remains at optimal pudge level? What’s left, polish the cat? The Shah Jahan built the Taj Mahal to honor his wife, but all he had going for him was money. Dave could sculpt it out of meatloaf. Plus he does little random things as a surprise, like fixing my bike brakes, because he knows I don’t like to and let it go too long, and as I hurtle over the handlebars that first time out, the last thing I think before I smack the pavement is: that man is so thoughtful.

I don’t do that much for him. My main function  is to be entertaining, because Dave puts a high value on being entertained. And if I’m not amusing enough, he can always tip me over or jump out from behind a door and that’ll hold him for days, no matter the consequences, especially since he already does the laundry.

But several years ago he hit on the perfect Valentine’s Day gift for me. He takes care of the spiders. 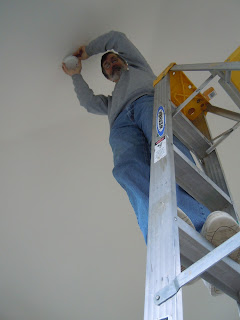 Not all the spiders. I have no quarrel with spiders. If one has set up where I’d rather she hadn’t, I might escort her outside by yo-yo-ing her on her little string, but that’s as strict as I get. No, he takes care of the terrorist spiders. We have a cell of them in the basement. They get together and plot missions down there, working out the logistics so that by the time they crawl up three floors and into the bedroom to dance on the smoke alarm EEP EEP EEP, it will be precisely three in the morning. After I have come unpeeled from the ceiling and done an inventory of working heart-valve flaps, and finally drifted off again, the clean-up terrorist spider comes in to finish me off. By the third spidering I am weeping and homicidal. Sometimes the attack is so well-coordinated, the whole posse goes off.

I used to think the smoke alarms did this for no reason, out of pure wickedness, but then someone told me that sometimes a bug walks across them and that sets them off, as it would anybody, I guess. My money is on the spider. Our flies are too wrapped up in bashing their heads on the windows, and our fruit flies are single-minded dullards, but spiders have that look of intelligence in their eyes (eyes, eyes, eyes). They look like they could pull it off. 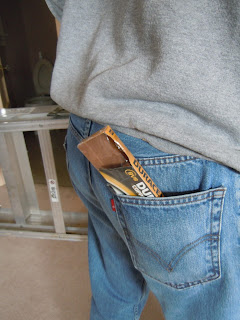 I make Dave get up and disable them. If he takes out the batteries, they still go off. If he yanks them out of the ceiling, they still go off. Finally he trudges downstairs and puts them in the freezer. For a long time I assumed he did that to make them logy and lethargic, but he says, no; we just can’t hear them in there. I want the smoke alarms gone. I’m told they’re hard-wired in and can’t be done away with, but I’m not buying it. I’m going to get a Republican to come over here with his Glock and take them out. My friend John tried to talk me out of the plan, but he’s biased. His house burned down. Twice. So I think we can safely disregard his opinion.

Anyway, Dave discovered that the terrorist spiders can be almost completely thwarted by the annual replacement of batteries in the smoke alarms, and we have not suffered a significant attack on the homeland in several years.

He does it on Valentine’s Day.

I should really pay off my cribbage debt.