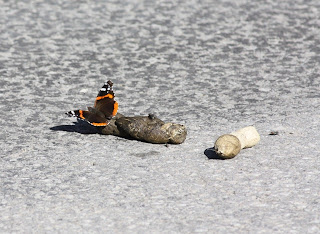 I’m at an age where life tends to be self-humbling. This can set you free. When I was packing for my trip to the New River Birding And Nature Festival, preparing to meet a bunch of people I’d only met on line, I was moved to do something about my Mom Jeans. I didn’t even know there was anything wrong with Mom Jeans, and when I was brought up to speed, it did occur to me that I ought to be old enough to escape derision for wearing them. Still, I succumbed and bought a pair with a very modest lower-rise. Somehow I didn’t notice till I got home that now my underwear was pooching out on top of them. Well, that’s it. I’m not getting new underwear to bird in. There’s a limit.

I needn’t have fretted. Birders are nice people and they aren’t going to look at your underwear unless you’re perched in a tree forty feet up. Even then they’re going to be looking for other identifying field marks. In my case, spots on the chest and a lack of eyebrows. 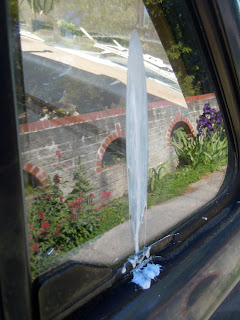 And while we’re on the subject of all those people staring straight upwards into the butts of birds, isn’t it time for another good Poop Post? Isn’t this a narrative that should just flow? Since I began writing Murrmurrs, poop posts have showed up with regularity. I have a whole collection of Poop Posts piled up over there in the left margin, and those don’t even include the ones that only mention poop in passing.
Bird poop is interesting in itself. Birds don’t pee, they just produce uric acid and hitch it onto their poop, which together account for the white and dark portions. This way they don’t have to fly lugging around a full bladder. They poop, pee, mate and lay eggs using the same hole. It’s a one-stop slopping center. This combo pee-poop thing does make bird poop more decorative, which was never more clearly illustrated than recently in Texas when a single bird poop draped over the rear-view mirror of a car attracted a horde of Catholics who saw the Virgin Mary in the splotch. This is just silly. I took a look at a photograph of the poop in question, and it totally could have been Mary Magdalene. 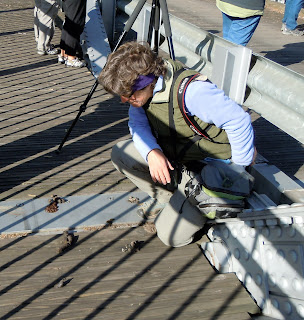 The thing about a good Poop Post is it should come naturally. It should not be forced out. Fortunately, there was a lot of sign on this trip that it was meant to be. You all can go to Disneyland if you want, but I prefer to be in the company of folks who get down on their knees to speculate about turd origins. Here, Julie Zickefoose is conjecturing that the giant doody piles on the bridge might be otter poop. Isn’t that exciting? Another of our guides, Jeffrey Gordon, contributed the fact that there is a name for otter poop (“spraint,” which sounds painful). With just a little research, I discovered that spraint is best identified by aroma, described as ranging from freshly mown hay to putrefied fish. If Julie didn’t get quite close enough for a good snootful, it can only be because she was unaware of this tidbit of knowledge. Because naturalists are brave and wonderful people. If I have a choice, and I do, I’m signing up with otter poop people.
In general, scientists are more interested in poop than anyone but your mother, and she’s over it by now. Much can be learned from poop, even dinosaur poop. Scientists study coprolites, which are fossilized dung, for clues as to the diet and health of the depositer. Put another way, a coprolite is a turd that has turned to stone, which, if it’s ever happened to you, is no laughing matter. For all we know, that’s what did in the dinosaurs.
Still, I might have been able to resist the call of the poop post, if it weren’t for the Friendly Waving Poop we all saw at Cranberry Glade. I had stepped over it earlier, and knew it was coyote poop, and when we came back around the same area later, one of the turds was waving at us. Upon closer inspection, it was revealed that a handsome butterfly was feasting on the turd. So much for “pretty is as pretty does.” 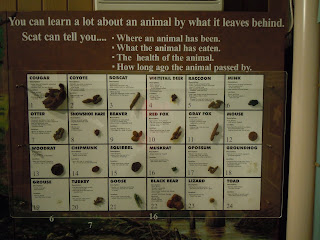 Five minutes later, we were in the Cranberry Glade Nature Center and came upon an exhibit that I am proposing as the official Murrmurrs Shrine. Please note that the exhibit is protected only by a sheet of Plexiglas, and one or more people had already been compelled to extract portions of the exhibit and stuff them under their shirts. See, it isn’t just me.
And when a poop post is in the pipeline, it’s best not to hold it in.
By Murr Brewster|2021-11-09T21:28:37-08:00May 15, 2010|Uncategorized|29 Comments