Blaming It On Clayton 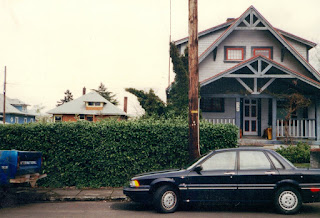 What happens is, we plant a perfectly sound plant in apparently decent soil and it putzes along for a year or two, gets its feet under it, and then goes splendid; it is a joy to one and all; passers-by light up when they catch sight of it; the angels smile down upon it; and then it dies for no reason. And Dave and I point at the corpse and pout and our eyes narrow and we growl in unison:


Clayton was our next-door neighbor when we moved in 41 years ago, and there was nothing about him that made us want to get to know him any better, until a kid burned down our garage and half our yard while we were away and it finally occurred to us we should make an effort to meet our neighbors. Clayton was friendly enough. But there were things. 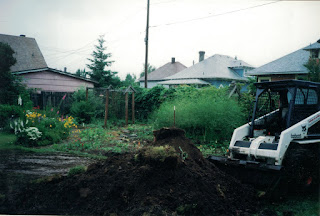 Such as the thing he had about pouring used motor oil into the soil under our laurel hedge. And because he owned a horrible car he went through a lot of motor oil. The hedge was no prize. I trimmed it twice a year and it was twelve feet across in places. You don’t want a laurel hedge, but it came with the place. NASA could have saved a ton of money on the moon shot just by allowing a laurel hedge to grow unimpeded and sticking an astronaut on top of it. “Hey, don’t pour that motor oil into the soil,” I might have eeped when I first caught him doing it. “It’s okay,” he said, “it keeps your weeds down.”

Which was true. Nothing grew under that hedge, although it should be noted the laurel wasn’t affected in any way.

Clayton shrugged and said he’d quit, but I know he didn’t.

Fast-forward ten years, and Clayton had suffered a relatively early death that was nevertheless in no way premature. We could have started not missing him a lot earlier, as far as I was concerned. We put an addition on our house and Dave leveled the laurel hedge. “We’ll never be rid of it,” I lamented, but Dave was strong and tireless and also had a 1969 four-wheel-drive International Harvester pickup truck and a big chain and access to the company flatbed and by gum if there’s no trace of the hedge now.

In its place, for a solid year at least, was a big pile of excavation dirt that Dave shoved around with a rented Bobcat. I announced my intention to do away with our lawn altogether, whilst grass sprouted audibly everywhere. One day we even got a visit from a city employee who hoped to pin a Nuisance notice on our door and scoot on out of there, but he was intercepted by Dave, who emerged in his bathrobe, kicked a beer can off the porch, hawked a tobacco loogey, and hooked a thumb toward the back yard. “Them’s just decorative grasses,” he said.

“You’ll never get rid of all that grass,” he lamented later, but I did.

The current garden is relatively impressive due to my strategy of throwing out all the dead stuff. But it keeps happening. A plant will putter along fine for a few years and then make a strangly sound and keel over. My suspicion is that the roots finally get down to the motor oil field. And that oil field is extensive because that soil got Bobcatted all over the place.

It’s probably not Clayton. It’s probably nematodes or Verticillium Wilt or a drainage issue or all of the above. But it’s satisfying to have someone to blame it all on. We can just snarl Clayton and plant something new, and move on. Whenever anything good or worthy dies, it’s Clayton. Though I would never rule out Mitch McConnell.