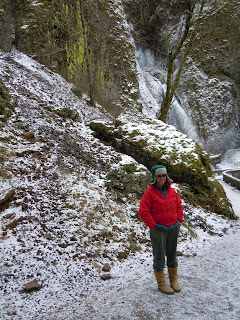 We had our big winter storm last week. You probably heard about it. It knocked American Idol right off the newscast. They had it pinned down a week in advance, too, which is unusual. Meteorologists are a fidgety bunch here. We’re right at the confluence of a bunch of geology that likes to really bollix up weather prediction. We’re in a bowl rimmed with mountains that wring the rain right out of the air and lob it back on us. We’ve got the warm, moist marine influence coming up from the south and west. Up top, we’ve got that troublemaker Canada breathing arctically down our neck. And we’ve got the Columbia River Gorge, through which a variety of delights is funneled, including, ice age permitting, the occasional 500-foot-tall flood, bearing boulders, mud and bits of astonished aboriginal Americans.

When all of these influences converge on Portland and duke it out, there’s no telling what’s going to happen. It’s like tossing three oiled monkeys into a silo during an earthquake: will they fling poo or make popcorn? There are too many variables. Sometimes it just comes down to monkey moods. We have to be prepared for anything.

Our standard warm wet weather comes from the ocean, and when we get cold air out of the north it’s usually dry, so when it’s cold enough to snow it doesn’t. That’s why it was really something when we saw the prediction a week out for a big snow on Thursday. In the paper, they print out a seven-day forecast with helpful visual aids, and Thursday’s picture had gigantic snowflakes. Here, the size of the snowflakes is a graphic indication of certainty, not moisture content. These were big ones. The sucker was on the way.

Nothing about the forecast changed the closer we got. It was awfully exciting. Television newscasts were dominated by reports on how to drive in the snow, illustrated by archival footage of reporters holding some in their non-mike hand. The principal recommendation was to not do it, and to take public transit instead, such as the bus or our newer light-rail system, which has an admirable record of service except in icy conditions, when it latches onto its overhead lines like a tongue on a flagpole. Snow is one thing; the stuff we usually get is undriveable, a bumpy ice lasagna, on which your car has all the gription of buttered mercury. Folks who are not from here cannot be dissuaded from rolling their eyes and complaining about our driving abilities. They engage their four-wheel drive and snap on their smirks and off they go, and later are easily picked out by their shiny undercarriages blossoming in the ditch like crocuses. 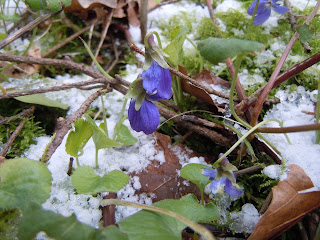 By Tuesday, I had settled on my proposed snow sculpture (an otter) and drivers all over town pre-ditched their cars to save having to do it in the cold. By Wednesday the weathermen on the television had damp stains in their trousers. Our city snow plow was rolled out to the theme of Rocky and bounced up and down in anticipation. Everywhere, folks who did not have chains for their bicycles donned their spring, fall and winter raincoats all at once,  doubled up on their sandal socks and walked to New Seasons to stock up on emergency arugula and Bananagrams games. Pugs whined nervously and licked off their sweater fuzz. By Wednesday afternoon citizens were glued to their media for up-to-the-second updates. The snow was inked in for seven p.m. At five p.m. came the announcement that the system had stalled over the Coast Range. Triple-A was sent out with a portable low-pressure zone to see what could be done. We went to bed under sparse spirals of flakes with Christmas anticipation. Thursday morning the schools were all closed, which had been done proactively on Tuesday in order to give the attention-deficit children time to absorb the information. Children frolicked up and down the block, many of them able to assemble an entire snowball within hours, which they tossed back and forth, re-packing as necessary. Their moms and dads stayed home too. 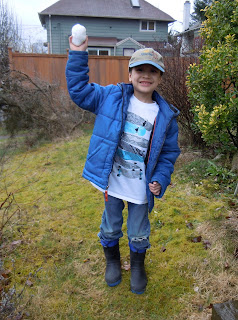 That’s what makes Portland great. Any city can have a snow day when it’s actually snowing.