The Blogosphere Is Flat 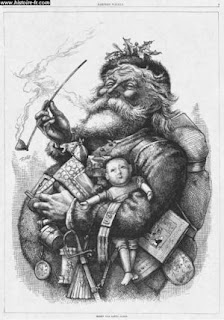 I was trolling the Internet the other day when I tripped over a blog with a post entitled “Eight Reason’s Santa Claus Must Be A Conservative Republican.” This didn’t look good, but following the same instinct that compels me to flip through the National Enquirer in the checkout line, I clicked on it.

Danger! Danger!
It wasn’t good. The blogger was a fan of both conservative Republicans and Santa Claus and he went on about it at some length. I found this absurdly upsetting. Santa Claus is the major figure in what passes for my religion, one in which happy fat people and sugar plums and exotic roof mammals play prominent roles, and I found myself as appalled by the blasphemy as any other fundamentalist. In a gingerly way, I appended a comment to the many approving comments on his post, just to tilt the universe back a little towards normal.
Danger! Danger!
“I agree,” I wrote. “Santa Claus got fat working one day a year and living off the labors of a platoon of elves.” Something like that.
Well.
The first woman to respond to my little bit of fun disapproved, describing my comment as “snarky.” The entire original post was snarky, of course, although from her standpoint it bloomed with truth, which made it not snarky. I refrained from pointing out that if I had really wanted to be snarky, I would have edited the post and all succeeding commentary for grammatical and punctuation errors, and who has that kind of time? However, I did put in another comment.
Danger! Danger!
Then everyone piled on. I was set straight on any number of misconceptions I am laboring under. Because of people like myself, who exist only to suck on the life-blood of hard-working Americans, our entire engine of commerce is about to run off the rails. My President is an actual devil and a Nazi and bent on destroying all that is good. Wealth is always in the service of goodness, and the extremely wealthy, if left properly alone, will pull the worthy up to prosperity. The tiger of industry will surge forth if I quit stepping on his tail, and our destiny, if not thwarted by socialism, is to wring all the use out of this planet and stride on the unblemished plains of Zargon, which we will reach either because of our scientific ingenuity or by catching a ride on the next comet of righteousness; and the only thing keeping us from oblivion is the fierce defense from upright and (by the way) heavily armed Americans, who will continue to stand tall and proud whilst socialist peas roll beneath them and eventually fall off the ends of the earth. And I must not dare to decry the violence that is surely coming my way, because–referring, inexplicably, to violence–“your side started it.” 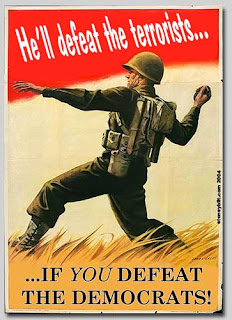 Well.
Now I’m all depressed. I was tempted to continue, but it was becoming clear that even if you picked off one gopher of ignorance with a shot-pellet of wisdom, there’s a whole golf-course full of them out there. And where do you begin? Do you mention that “nanner nanner” has two Ns in the middle? Do you start by gently pointing out that, in reality-world, it has long been known that peas will not roll off the ends of the earth, because it’s really like a giant plate with a lip all around it?
It’s not just that you don’t know where to begin. There’s no ending it, either.
By Murr Brewster|2021-11-09T21:30:51-08:00January 23, 2010|Uncategorized|29 Comments