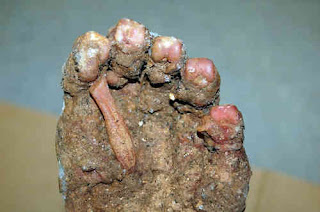 A woman in Honolulu recently found a human hand floating around. She found it twice. It kept coming back. Dueling ukuleles plinked ominously in the distance. Locals were chilled by the discovery, but in reality, sections of human beings actually turn up rather often. There’s a boom market in them in the Salish Sea, off the coats of western Canada and Washington, where ten feet have washed up in the last few years. Authorities do not believe that all ten came from the same person, since such a person would likely have been a superb swimmer. But identities can remain elusive, as well as the cause  of death, and even the approximate time of death. Currents can carry a body part a long way, and, according to Wikipedia, “under optimal conditions, a human body may survive in water for as long as three decades,” which is not to say they don’t get a little pruney. Still, detective work does sometimes bear results, as it did when a set of legs, arms and a torso were found last year in the Bahamas. Local sleuths were able to deduce much just from where the items were found; in this case, the stomach of a tiger shark.

Police in Juarez, Mexico have likewise concluded that the severed torso found there recently is probably connected to the severed head and genitals that had already been found nearby, although it seems to me the exact opposite case could be made. 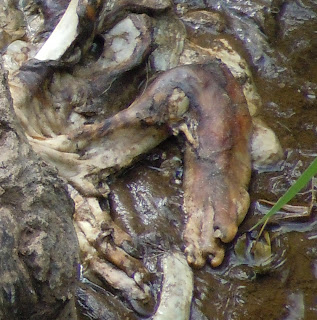 The point is, such things are discovered with some frequency. While we were on a trip to a local wildlife refuge recently, Dave discovered a human foot submerged in shallow water. We examined it as closely as possible, but the deterioration was so advanced that we were left with many mysteries, the foremost of which was how a human foot got attached to a dead otter. It may have huge scientific significance: the human-otter link has been missing for years.

And, among our own circle of friends, Linda, who is terrific at noticing things, also once found a foot while she was walking along Revere Beach, north of Boston. Mystery surrounds this discovery also, but we do know it was found just down from the corner of Guido and We’re-Going-To-Take-A-Little-Ride, and was still in its original concrete casing. 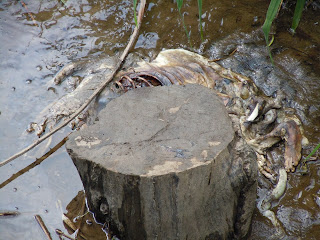 So speculation tends to run rampant in cases like the Honolulu Hand. The homicide department was all over it; John Boehner suggested it was the natural consequence of over-taxation; Harry Reid countered it belonged to a hangnail victim who couldn’t afford medical insurance; and mothers everywhere who had warned that “your hand will fall off if you keep doing that” were vindicated. With all that expertise brought to bear, it’s a wonder they ever consulted a scientist, but nevertheless the hand was eventually revealed to be a dried squid. I’m not surprised: human body parts can easily be mistaken for other things. I myself have body parts that used to resemble melons, and are now more like something in the pita-bread family.