Bound For Glory: Part One

I’m on vacation. While I’m gone, you’ve been reading excerpts from Miss Delivery: A Postal-Mortem, a book of postal stories I wrote four years ago. We conclude with a two-part fantasy about the end of a career. 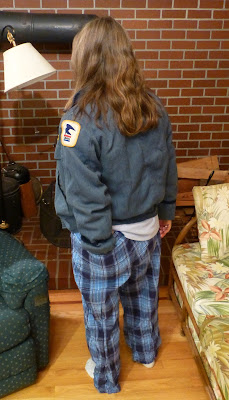 Have you ever wanted to see your own future? Think
carefully.

I’ve had the opportunity to glimpse my future every few months
or so throughout my career. It clumps towards me, stumbling through traffic.
I’ve come to recognize it from a distance. My future takes on the shape of a slightly
different man every time, but his approach never varies. He first appears as a
lumpen mass going nowhere in particular, and in no particular hurry, and then
he spies me and tilts across the street with a little more purpose and a spring
in his mosey. “HEY!” he’ll start out, projecting from about a block away. “ARE
YOU ON YER AUTHORIZED TEN-MINUTE BREAK?” This is followed by a deep, phlegmy
chuckle. He is nearly overcome with hilarity by the time he has ambled all the
way over to my position, clapping a soiled paw on my shoulder to steady himself.
His trousers are puckered up on the sides where the stripes have been torn off.
He has a sidewise grin, leaky eyes and a throat full of loogies, and he looks
really pleased with himself, because he’s about to deliver his punchline.
“Ah used to do what you do,” we say in unison, not that he notices.
I smile and tell him that I’ve already taken my break and
am sorry but I have to be moving along, although I haven’t and I’m not, but
he’s having none of that. He’s faced down dogs, postal supervisors, and his own
personal Kryptonite in the form of laundry detergent, and he’s not about to be
fended off. He has spent a lifetime developing two or three conversational
themes and he has his wheezy heart set on running them by me. The man–every
one of them–is as tenacious about his monolog as a crow attending a
freshly-squashed squirrel. You could drive a Buick of distraction right towards
him and he’d just hop aside for a few moments and then he’s right back on it. I
settle in.
“You’ll never catch me back there, nosiree,” he starts out. “Nope:
free as a bird. I did my time. Now it’s time for the good life,” he continues.
“I can see you’re dressed for it,” I say.
“Thing is, they can only ask so much of a man, and then
there ain’t no more. It’s like gettin’ blood from a tune-up. And we didn’t have
it so cushy back in ‘sixty. Not like you all have it now. Yer own Jeep, and I
don’t know what-all.”
“You’ve got something hanging off your chin, there,” I contribute,
pointing. The man wipes off a curtain of slime on a crusty sleeve.
“Thing is, they’ll take whatever you can give ‘em, and then
they’ll just keep asking for more. You gotta learn to stand up for yerself. ‘You
cain’t fire me,’ I tole them, ‘I didn’t do nothing.’” He hikes up his trousers,
squints up into the sun, and shoves his arm into his pants up to his elbow for
a prolonged scratch. “But they push, and push. It’d make a drinking man out of
you, if you didn’t already have the knack,” he concludes.
“You shouldn’t talk with your pants full,” I say.
“Haw. You sound just like my ex-wife, Irma. Anyway,” he
continued, “That’s why the boys went on strike back in New York back then. You
wouldn’t’a had none of what you got now if it weren’t for the boys in New
York.”
“You should have those boils looked at,” I say. “They’re
going to start pussing up and you’ll end up stuck to the park bench.”
“Anyway,” the man continued, “I’m done with all that. Free
as a bird. No one telling me what to
do. Not that they don’t still try. I’m sittin’ at home, minding my own
business, and the man come right up to the window and tell me to move it along.
What? A man can’t enjoy a little peace and quiet in his own home? After forty
years service to his country?”
“You smell like poo,” I observe.
“Haw.”
“Seriously, it’s like something died.”
“Haw. You sound just like my ex-wife.”
“Irma.”
“Naw. Bootsy. Anyway, I ain’t taking any crap from Mr. Fancy
Pants Cul-de-sac about where I should and where I shouldn’t be living. It’s a
free country. If he thinks it’s so important I ‘move it along,’ then he can
just bring his own rope and haul me out of there, because that Econoline ain’t
turned over since the oil run out. And that wasn’t my fault.”
“My, look at the time,” I say.
“There wasn’t a thing wrong with the crankcase until my
ex-wife Doris got it in her fool head to ‘express herself’ with the .22. Use
yer words, I always say, but does she listen?”
“Gotta go,” I insert.
“Haw. You sound just like my ex-wife.”
“Which one?”
The man scratches and ponders, ponders and scratches. “All
of ‘em,” he admits, and then my future claps me on the shoulder one more time,
turns, and heads off in the direction of the tav.
To be continued.
By Murr Brewster|2021-11-09T21:05:07-08:00January 19, 2013|Uncategorized|20 Comments