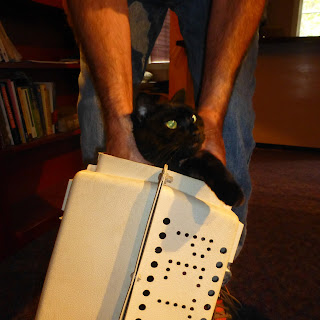 Some people refuse to be put in a box. And by “people” I mean cats. And by “some” I mean our cat, Tater.

Most people have no trouble whatsoever being put in boxes. They’ll put themselves in their own boxes and label them so you don’t even need to look inside to see who’s there. They’ll advertise themselves on their car bumpers and put Confederate flags on their license plates and kittens on their checkbooks. They’ll carefully curate their Facebook personae by linking to politically charged sites and engaging in snide commentary with strangers, or praise the Lord a few dozen times a day for every little thang, or demonstrate their vulnerability by insulating themselves with pictures of adorable animals. They willingly provide access to all of their buttons and display them to the entire world. Push here, they say. You’ll see what makes me squeak. We need only a glance and we know what box to put them in. 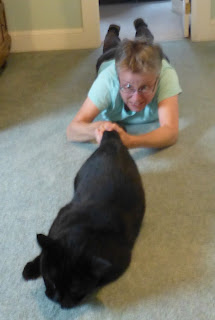 Not cats, so much. Your standard government-issue cat is going to be fine with putting herself in, say, a cardboard box. Don’t you try it, though.

Tater is a relatively biddable cat, as they go. She has rubber caps on her claws, because she persists in waging war on upholstery, but not on us. But try to jam her in a box? Good luck with that.

A cat’s social behavior and tendency to write its own rules has been formed through thousands of years of knowing that nobody wants to eat cat meat. Your normal cat will have predictable responses to stimuli.  If you pull on her tail, she will double back and try to staple you with her face. Not Tater cat. If Tater is heading in a direction you strenuously do not want her to go, and you grab her tail–an evolutionary relic from some Labrador Retriever in her personal woodpile–she will continue in her preferred direction, at a slightly reduced clip, towing you on your belly, if need be. She is a sturdy cat.

Similarly, if you want to put a normal cat in a crate, you approach her from behind and grobble the back of her neck like her own kitty mama did when she was wee. This move is designed to strip the obstrepory right out of a cat. A neck-grobbled cat will fold up into damp laundry before your eyes. She can then be lowered into an upended crate with no fuss. There’s some kind of instinctual thing that happens to cats that are properly squoze at the back of the neck. It’s like the knee-jerk reflex. It’s a guarantee.

You come up on Tater from behind with a big, capable, muscular hand like (for instance) Dave’s and grobble her by the back of the neck, and none of that happens. She may have been snoozing like a bag of pudding but all of a sudden she develops discrete body parts and every one of them is sticking straight out. She looks like an opinionated starfish. It takes two of us to jam her in the crate and it always seems like we’re going to snap something important off. And that she might be fine with that.

Sturdy cat, that one. 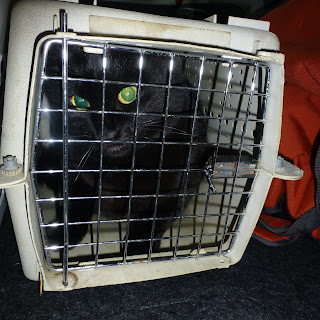 And we do this because we truly believe she’ll feel better if she’s in our cabin for three days sleeping on the ratty sofa next to us than if she were left home alone with a bucket of kibble, sleeping on a ratty recliner, one that was just fine before she and her predecessor ratted it all up. We think she likes us that much. We’re right about that, too. She does not have the luxury or burden of thoughts about the future, so we have them for her. As far into the future as she gets is: am I being boxed up? And am I about to be boxed up? And when she is, that’s when she earns her nickname.