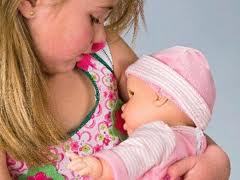 Poor Breast Milk Baby is having trouble getting traction in the toy market, even though Bill O’Reilly thought it was creepy, which should have boosted sales in the blue states. What sets BMB apart from the rest of the baby dolls out there is that it can be attached to a child’s personal breast region by means of a halter. It snaps right onto little daisies at nipple height and sensors in the daisies produce suckling noises. While Mommy is busy feeding the new baby in the family, the older sister, or brother, can provide the same sort of care for the doll. This is no doubt appealing to a certain sector of young children, and it’s probably up to the adults to monitor whether or not the child should wear the dangling babies out on the street like a mama possum. Bill O’Reilly is upset at what he perceives as the early sexualization of the child. (He probably puts “mammal” pretty far down on his list of self-descriptors. And I’m guessing he played with his sister’s Barbie in some fashion, probably by himself.)

So Breast Milk Baby isn’t doing too well in America, even though there has been plenty of precedent for this sort of thing. The Betsy Wetsy doll goes clear back to the 1950s, when it was Number One on many girls’ Christmas lists, leaving Little Chuckie Upchuck and Debbie Doots in the dust. I was given one myself, and can still remember it. You poured a bottle of water in the front end, and it came out the bottom end. I was just old enough to be familiar with the concept of water running downhill and the novelty wore off on Day One. Anyone who thought I would like something I had to clean up after had the wrong girl. My own folks gave up early on getting me dolls. A few filtered in from distant aunts but they were well-neglected. I liked stuffed animals.

So baby dolls in general are probably more appealing to children who have been required to share their space with a real baby. I was that real baby. And I expected to be taken care of or ignored and, in any case, to have no responsibilities whatsoever. My stuffed animals had jobs and personalities and things to do, but they didn’t need wiping. The horror! At some point I was deemed old enough to babysit other people’s kids, for which I received fifty cents an hour. I was vastly overpaid. As far as I was concerned, I was just there in case the house burned down. 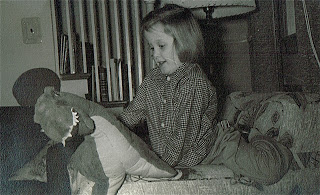 Breast Milk Baby wouldn’t have been a hit when I was growing up. Betsy Wetsy came with a bottle and so did most of the rest of us. Mommy was a fully-clothed entity: she had a comfy hourglass figure encased neck to knees in modest cotton. I could see the general shape was different from Daddy’s but I was not interested in or provided with much detail. If I search my memory for any such detail, nothing in particular sticks out.

And that is why the painting Daddy hung above the fireplace was so puzzling. One day, I set about to satisfy my curiosity. My neighbor Susie and I together couldn’t make it out. She usually had more reliable information about Things Which Must Not Be Said In Front Of The Children than I did, but she was a year younger, so she was puzzled too. The painting in question is of a young, smiling black-haired woman in a red dress. The dress in question stopped short of getting the job done, by my mother’s standards. Two smooth globes rose above the top of it. Susie and I had no idea what they were. They looked like little bald heads. We pointed. “Are those her babies?” we asked.

We did not get an answer. We asked again. Still no answer.

The painting was probably a famous one, maybe one in the National Gallery of Art, which was nearby. It can safely be assumed that Daddy picked out the painting. He liked that sort of thing. He liked Sophia Loren. He liked her a lot. After Susie and I asked our question, I’m thinking Mommy liked it a lot less. She might have thought it could only lead to trouble.

55 years later, she’s been proven right. Because I’ve just wasted a ton of time trying to find the painting on line. I’ve Googled “painting red dress boobs” and have only scratched the surface of the five billion images that came up. Dave’s offered to try to help narrow it down, maybe some day I’m off running errands. So there’s that.