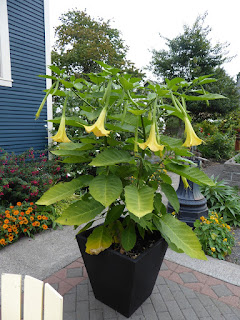 I should point out that nobody around here has a decent lawn. Those are all down the hill in the nicer neighborhood, where people wanted to live before they wanted to live here. They’re all sitting down there in their big houses wondering why the little bungalow pieces of crap up here are going for the same amount their houses are. Ha ha! Who knows? But their lawns are nice.

We’re none of us supposed to like lawns anymore, because they take so much water and work and fertilizer and chemicals and stuff. So up here we look down on the big houses and big green lawns as evidence of poor moral character, and even though we would secretly like to lie down on them sometimes, we don’t covet them out loud. Up here it is now considered normal to have tomatoes and squash in your front yard, or at least a bunch of xeric plants that look the same alive or dead and don’t need a hose in either condition.

A lot of folks up here do still have leftover default lawns, but they’re really crappy. I was just thinking I hadn’t heard a lawnmower in forever, and that’s because no one waters their lawn after God quits doing it in the spring, and it just looks like something a horse would spit out. The grass is brown and short and cowlicked with big sproingy weeds.

I should also point out that our aversion to watering lawns has more to do with solidarity with unfortunate drought-stricken populations than it does with an actual water shortage. We have lots of water compared with most people. I use more than most, but I hand-water it in the dark like I’m sneaking a cookie. I grow a lot of pretty flowers and not as many edibles, and come the earthquake my preference for Food For The Soul is going to kick me in the ass. But anyway when I do select flowers, I tend to ignore the ones that want lots of water.

Except this spring. I saw a nice Brugmansia in a little pot and thought: hey, it’s been a few years since I’ve grown one of those, but I’m in the mood for a little pizzazz and ka-pow. I bought a giant pot for it because I know it has ambition and I put it on the patio and it looked like a dandelion on a football field. For a week. 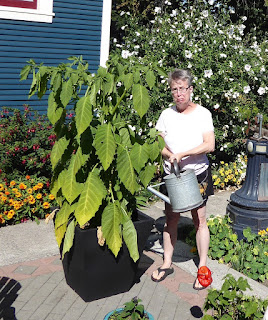 Thing about those Brugmansias is you can’t tell how big their paws are because they’re underground. Within a month my plant was a galoot. One day it began to pout dreadfully. I hurried some water on it and it re-erected fast. The next day it pouted harder and I dumped a few more gallons on it. Day after day I rushed out with more and more water as it clutched its throat and threatened to faint on the divan, and every time it popped right back up and said “Just kidding.”

This has to be how people feel when they go to all the trouble of making a cute little baby and they feed it with tiny spoons for years and years and then all of a sudden it’s a big meaty teenage boy with a bad attitude and a 10,000-calorie-a-day habit and they find themselves thinking “What if I just don’t feed it?” and that’s okay. Go ahead and think it. You know you’re going to feed it anyway. You don’t want all those years of strained peas to have been in vain.