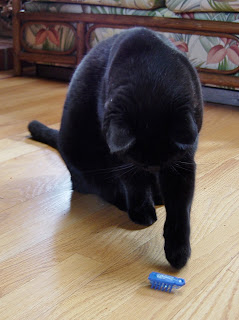 Tater the cat skeetered her favorite bug under the oven and now it’s gone. The bug is a robotic HexBug from Radioshack. It looks like a humming toothbrush head and seems to be able to extricate itself from most any situation, but not this one. We poked under there with sticks and flashlights but the bug has fallen into a pit and we can’t reach it. “Well, I guess we’ll just have to listen to it until the battery runs out,” Dave said, giving up. Oh no. 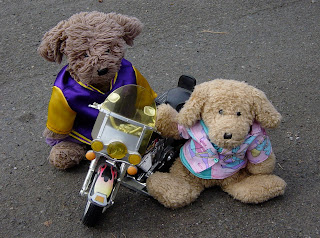 We’re not good at listening to things die. We endow most objects with souls even while we give short shrift to our own. I once drove 15 miles to fetch Pootie’s little buddy Hajerle, a motorcycle fan (and, like Pootie, technically a stuffed animal), so he wouldn’t miss the Harley parade coming through town. I was inconsolable for weeks after the Sojourner rover landed on Mars and lost communication with the mother planet. I’d well up every time I thought about the little dude putzing around in the red dust, emitting unanswered eeps of fear and abandonment. Probably I invest too much emotion in things like that because I cannot bear to contemplate the suffering of sentient beings. I fire off checks to Haiti and save my tears for tiny toothbrush heads suffering under my oven. 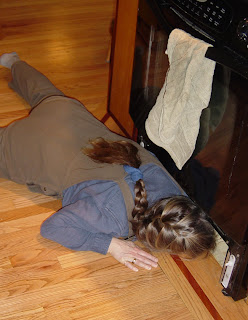 Dave’s a big strong fellow but he’s the same way. He freely admits he would be a vegetarian if he was responsible for dispatching his meat himself. He has tried numerous times over the years to cut short the suffering of various wounded animals–rodents, opossums–often without success, reducing the animal to hamburger and himself to a weeping, sodden mass of misery. On the other hand, he loves meat. Every kind of meat, and every part. If it rooted or mud-wallowed or basked in the sun or gamboled in the grass, or just digested things or excreted urine or cleaned toxins out of the bloodstream or performed any number of other revolting functions, he’ll salt it up and give it a go. And he has declared himself willing to try anything. “If I went to the store and found a package of meat labeled ‘Robert,’ sitting on the little Kotex on the Styrofoam tray and neatly wrapped in plastic, heck, I’d try it,” he has said. Whereupon people tend to get real quiet. Certainly, it sheds a different light on the random friendly ass-squeeze.
So when we hauled in a massive sturgeon from our friend Scott’s pond, and pulled it up on shore, there could have been trouble. Sturgeons are actually prehistoric, and you’d have to beat one straight into the Cretaceous just to get its attention. But when Scott supplied Dave with a .22 pistol for the coup de grace, he was transformed. In an instant the sturgeon was dinner-worthy with a tidy hole in his head. 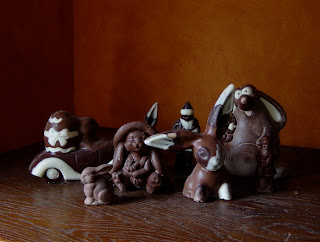 I told Dave he would have overcome his sensitivities just fine if he had been born in a different era. He considered the possibility for a few moments while I indulged in a reverie of him in a coonskin cap and leather pants, then chaps, then feathers and a loincloth. “Nope,” he said, snapping me back, “I’d be the first vegetarian pioneer.”
I started to disagree and he cut me short and pointed me towards Exhibit A, a line-up that grows from year to year. “I can’t even eat my chocolate Easter bunny,” he said. Point taken.
By Murr Brewster|2021-11-09T21:30:10-08:00March 10, 2010|Uncategorized|21 Comments