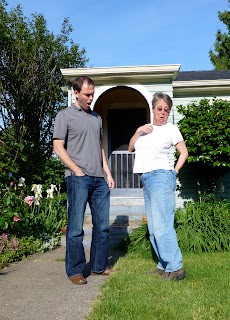 It could be said–it has been said–that I can be a bit of a princess when it comes to certain things, like butt splinters. I have found myself driven to distraction by the sudden manifestation of a butt splinter, and will dig inside my pants to try to find and evict it, even in socially inappropriate situations, which, I am told, is all of them. It always feels like a tiny little splinter is in my underpants. I manually examine the irritated micro-area on my person, and the adjacent underpantly material, but I rarely find the culprit. Someone once pointed out that I might be able to reduce the butt splinter frequency by wearing a thong, but wearing something in which the entire garment disappears is not an option for one as delicately wired for intrusions as I am. It has also been suggested that I could distract myself by thinking of something else instead, but I don’t like to think that much. It interferes with looking at shiny stuff. That’s what makes the butt splinters so vexsome.

Since I never find anything in my underwear that doesn’t belong there, at least since menopause, it has occurred to me that the butt splinter itself is actually a random reordering of my skin cells. A small group of them has lined up just so and oriented themselves such that any pressure will drive them in. It doesn’t sound like a big deal, but this is what you get when you’re a person of few physical complaints and nothing whatsoever on her mind. You get phantom butt splinters. And you tip over a lot.

I accept that other people are not prone to butt splintering, although I suspect that many of them simply will not admit to it, but what I don’t understand is how Bill McNeely managed to live with a nearly three-inch knife blade inside his back for several years without realizing it. He admits it was itchy, and he apparently made a habit of pawing at it, but the actual embedded knife was under his radar. And, I suspect, under a massive amount of what we will call personal insulation. You get enough meat on you and all kinds of things can hide in there. I didn’t realize that until I developed back fat folds, and when I bent over to tie my shoes, dimes and Skittles and stuff fell out. 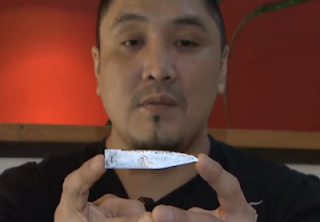 Mr. McNeely should have, at the least, been suspicious of his itchy spot. Whatever it was wasn’t going away. Moreover, the itchy spot was at the exact same location as a knife wound he had suffered years earlier. He had gotten medical attention for it at the time, but not, I would argue, the finest in medical attention. By all appearances, the doctor hacked off the hilt and stitched him up. Now the sort of lack of attention that would cause a man to host a blade without realizing it could, I suppose, be put down to the fact that he is Canadian. Canadians are noted for being unflappable, although I will maintain that this is an untested assertion, because nobody ever really tries to flap a Canadian. More to the point is that Mr. McNeely is an extreme Canadian, holed up just under the roof of the planet, at the tippy top of the Northwest Territories. The Northwest Territories are so wicked cold nobody even wanted to claim them for a province. People just refer to them as “up there.”

And it’s so cold that even the women have to worry about their balls snapping off (oh, they have them). The sun briefly cruises the horizon like a pea rolling off a plate. The surgeon operates by the light of the Aurora Borealis. But now the glaciers are calving, the polar bears are stranded on dots of ice, and the locals are ordering tomato seedlings for the first time. Bill McNeely has finally thawed out enough to feel pain, and if the rest of the First Nation peoples do too, Exxon Mobil is going to have a lot to answer for.