By The Skin Of My Shin 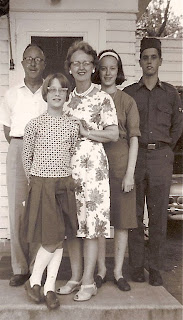 When I was in seventh grade, some girls trying to get a toehold on the adolescent food chain pointed at me in the hallway and made fun of my hairy legs. They were extrapolating from a fine blonde fuzz above my knee socks. My classmates were wearing nylons with garter belts by then. I found myself incapable of consulting my mother about shaving, let alone nylons. I was the baby in the family, with old parents, and already had internalized my role as the one who would keep my parents young, so I couldn’t bear to remind them I was growing up. I shut myself in the bathroom and grabbed my father’s razor to take care of this vital issue myself. I remember thinking it would require a lot of pressure. I started with the shin bone and neatly peeled off a long strip of skin. In too big a hurry to put two and two together, I did the same thing on the other leg. It looked like the Bates Motel in there. I pressed layers of toilet paper to the shins and hid them under knee socks until the scabs fell off.

The first time I recalled and related that episode, in my forties, I burst into tears. Over leg fuzz. 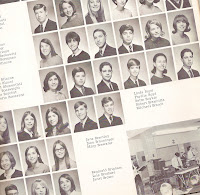 You can still see the scars. It’s a little reminder of the power of peer pressure. If we’d been expected to shave our wrists, I wouldn’t be here today. It’s a dangerous age, and those who sprout out a little ways from smooth will get shorn down. The bulletins on acceptable behavior and wardrobe are changed almost hourly and it’s essential to keep up. Sometimes it’s a matter of life and death.

Right here, we’ve heard report of a student teacher, Seth Stambaugh, who was dismissed because of a short conversation he had with a kid in his fourth-grade class. Johnny wanted to know why the teacher wasn’t married yet. “It’s illegal for me, because if I did marry I would choose a man,” he told the youngster. Wrong answer. Oh, not wrong in the sense of being anything but the truth. But as everybody knows, the correct answer is: “I just haven’t met the right girl yet.” Not “I just haven’t met a girl with a penis yet.” The teacher failed to stick to the script, and the script has been around a long time.

1916, Iowa. Johnny: Who are you voting for for President, Mrs. Bonkworthy?
Incorrect answer: I am not legally allowed to vote, Johnny, but if I could, it would be for Mr. Wilson.
Correct answer: Heavens to Murgatroid, Johnny, my brain is far too fluffy to hold facts and opinions in it! Now let’s move on to our history texts. Johnny, maybe you can read it aloud, and that way I can learn it, too.


2010, Texas. Johnny: Why is the sky blue?
Incorrect answer: Well, Johnny, the longer wavelengths of light pass right through the air, while the shorter blue wavelengths of light are absorbed and then scattered off the gas molecules in the atmosphere that God probably didn’t whomp up in one day a few thousand years ago.
Correct answer: Who knows? Purty, though, ain’t it? 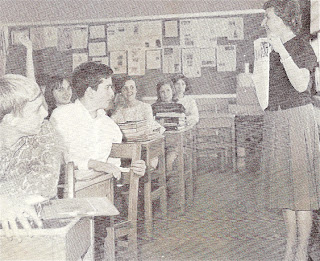 Kids really shouldn’t get too much information. Not in an institution of learning, certainly.

No one has said, but I suspect Johnny was put up to this question by his parents. Somebody had already complained to the school about the student teacher’s attire, which was suspiciously neat and tidy. I think somebody’s parents tried to seal the deal by putting him on the spot and hoping he’d tell the truth, and then this dire threat to their son’s welfare could be excised from the classroom.

He’s probably not a direct threat, or he would have answered “I am not married because I am waiting for the nanosecond you, Johnny, turn eighteen, after I have groomed you for ten years.” 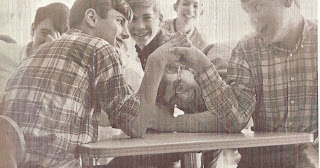 He’s probably just the other kind of threat, the one who demonstrates that it is normal for some people to be gay, thus setting into motion a vacuum of impressionable youngsters into the irresistible gay lifestyle choice. Johnny’s parents obviously realize that anyone would choose a same-sex relationship as long as it was acceptable. Who wouldn’t?

Odds are, at least one child in that class, maybe even Johnny, has an inkling that he might have something in common with that teacher, and he has just learned the consequences. That strikes me as being a threat, but that’s because I’ve never thought Johnny would be better off dead than with Fred.

As lifestyle choices go, suicide is a poor one, with no future in it. I would have thought it was a more difficult choice to make than, say, snapping out of it and cruising the opposite sex for someone you could always divorce later. But apparently, for some of our children, it’s easier.