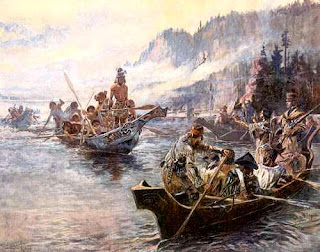 It is worth noting that Lewis and Clark, after having withstood hardships and horrors and ambush by mosquitoes, were nearly done in after a few days in the rain at the mouth of the Columbia. Their very survival was in question; their clothes were a fright; they near perished from whininess. They had fetched up in a dot of a cove they called Dismal Nitch, and so it is called to this day, there being no compelling reason to change it. Dismal Nitch is south of Cape Disappointment and just around the bend from Go Stick Your Head In The Oven Bay. It’s rainy.

This is the kind of trouble you could expect from an outfit calling itself the Corps of Discovery, bound and determined to discover things all on their own, when they could have asked anybody and they would have found out how rainy it is. The whole area is renowned for moistness, but they’d have done fine with a little rain gear and a proper attitude. “This is the first of ninety consecutive days of rain,” they might have said, “a good time to catch up on our reading.” 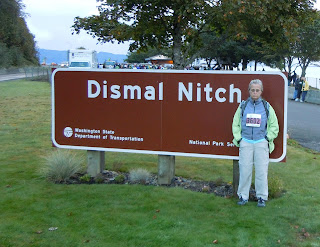 Instead they come boating up wearing buffalo hides that promptly rotted away, and they got out of their canoes and into a giant snit. It rained sideways for six days, which anyone could have told them is quite typical of November, and–as Clark described it–our camp entirely under water dureing the hight of the tide, every man as wet as water could make them all the last night and to day all day as the rain Continued all day…and blew with great violence immediately from the Ocian for about two hours. Were this not Dismal enough, some of the party elected to drink too much salt water and on them it acts as a pergitive. That probably put a capper on things.

At least they had salmon. Salmon are anadromous fish that spawn in tiny streams and make their way, against great odds, to the Ocian, where they live and grow for up to five years, and if everything goes just right, they return towards the waters of their birth and become quite delectable in a lemon caper sauce, if they’re not overcooked, and that’s where most people go wrong. It’s hard to beat a properly prepared salmon, and yet that is just what Lewis and Clark did; they subsisted on “dried fish pounded,” which pretty much defines overdone. Even if they had had the faintest idea what to do with a salmon, it’s going to get on your nerves if you eat it every day all winter long. It’s not like peanut butter.

The native Chinook people, meanwhile, were happily high and dry, wearing clothing woven from the bark of cedar trees–essentially, they were wearing lightweight log cabins, and the rain just sheeted off them. Things were even easier on their descendants, who were able to update with aluminum siding and proper gutters, but these people were sturdy and strong. They steadily supplied the hapless Corps of Discovery with pounded salmon in an effort to turn the tide of invasion, but it was for naught. Soon enough there was an epidemic of white people everywhere you looked, and they commenced doing things Lewis and Clark couldn’t even have dreamt of. Bottled water alone would have rendered them flabbergastric. 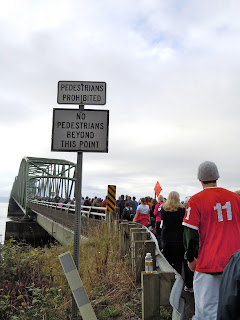 They also laid in a bodacious bridge across the mouth of the Columbia, over which Lewis and Clark could have simply strolled to Oregon, not that it would have improved their mood any. They invented automobiles to stick on the bridge. And once they had achieved the invention of the kilometer, they were able to concoct the Great Columbia Crossing, an event wherein thousands of people are bussed over the bridge to good old Dismal Nitch and allowed to walk or run 10 km back to where they started. You can almost hear Lewis and Clark’s minds blowing across the winds of history, but the fact is many activities become plausible when you do not have to slay your own dinner or duct-tape your disintegrating buffalo attire on a daily basis.

On the day Dave and I joined the Great Columbia Crossing, heavy clouds were everywhere, rolling in off the ocean and piling up inland. Nary a drop of rain touched us, because God favored our endeavor, although all around us we could see the squalls dumping rain on the folks He hated. For two hours half of the bridge was closed to automotive traffic. Modern people, especially in the blue states, love bicycle or pedestrian events that inconvenience motorists, and we swell with satisfaction when we see the line of cars creeping sullenly along at our sides. For a short while, we have defeated the scourge of modern-day dependence on fossil fuels, and we swing our arms and thump our chests on our commemorative T-shirts. It’s a great feeling, well worth the two-hour drive from Portland.