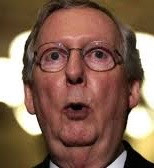 The nation narrowly averted complete disaster this month with the demise of Justice Antonin Scalia. Almost immediately a low-pressure system of murder conspiracies appeared ready to collide with a strong front emanating from Senator Mitch McConnell (R-Kingdom Of Coal); sources say conditions had the potential of turning into a Category 4 shit storm. But once the Fox News weather reporters, clutching their hats and any available light posts, were blown out of camera range, some of the more dangerous elements dissipated, leaving only a persistent ridge of high pressure from Republican leadership, and the nation is used to that.

It is not expected to have an immediate effect, or a long-term effect either, and the public can now rest assured that although we may experience a lot of wind, nothing at all will happen for a long time.

Senator McConnell, according to his Wikipedia entry, was “raised as a young child” in Athens, Alabama, thus putting the lie to the rumor that he was raised as a honey badger. He contracted a mild case of polio as a youngster, but his only lasting disability was his tiny sphincter of a mouth. Mr. McConnell’s mouth is now so small that he can only push a “no” out of it.  “Yes” would require the extravagance of lips. When you’re two Q-Tips and a wine cork away from suffocation, you learn to be on your guard. This may account for his stubbornness and intractability, now that we know he was not raised among honey badgers.

At some point just before Justice Scalia’s internal temperature matched the ambient temperature of the bedroom he was found in, Mr. McConnell assured the nation that the jurist’s memory would not be sullied by replacing him as though he were an old light bulb, especially given that President Obama only has the squiggly kind. He announced that the Republican majority in Congress would not consider any new nomination until the American people have had an opportunity to have their say in the November election. Not the American people who said they wanted Obama to represent them for eight years–other American people. Real American people. “We will consider a nomination as soon as we’re done with Mr. Obama,” he explained liplessly, “and we were done with him seven years ago.”

Republicans, meeting behind closed doors, were unanimous in their agreement that the business of government should be put on hold indefinitely. Government doesn’t work, they point out, so neither do they. All across the country, eager new Republican candidates are lining up to get in on the inaction. The Constitution, they say, does not require them to do anything at all if they don’t feel like it.

The President responded by vowing to submit a candidate in due order, and spent the rest of the day chasing Mr. McConnell around the Senate chambers wiggling his finger. “Make him stop,” Mr. McConnell said. “I’m not touching him,” Obama said.

The Chair of the House Subcommittee on Mining and Undermining, responding to allegations that the Republican leadership is deliberately disseminating falsehoods about the President, issued a strenuous denial. “There has been no such activity,” he said, affronted, “either conscious or musliminal.”