Can We See A Show Of Bands? 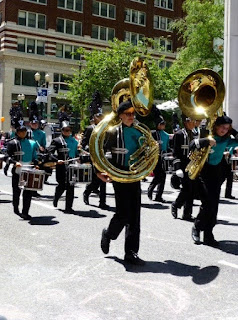 Last week Dave and I walked downtown to catch the Rose Festival Parade, as usual. Our timing was a little off. When we ambled up to the route, we saw that we had already missed some of it. But there were chairs set up right on the street, courtesy a hotel, and no one was in them, so we sat comfortably in the shade, feeling lucky, just in time to see a high school marching band come blatting by. Up. Town. Funk you up. Uptown funk you up. If that doesn’t bounce you in your cushy hotel folding chair, you need to get your bouncer re-strung. 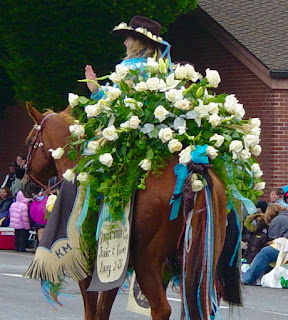 This is my favorite part of the Rose Parade–all the high school marching bands. Everything about them. The uniforms that fail to make them identical: the clarinetist marching around inside his uniform just trying to touch cloth; behind him a uniform completely stuffed with trumpeter. The brass. The drums. The sheer bravery of the outgunned piccolo section. It makes me cry. If any of the bands rips into Stars and Stripes Forever, I fall apart completely. I can’t remember seeing any parades when I was a kid, and I was never in a band or orchestra. So I guess I’m nostalgic for a past I didn’t even have. Probably most of us are. 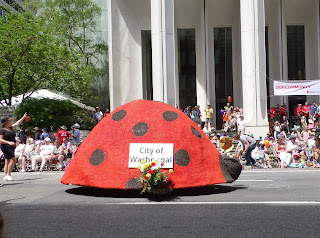 We settled in. Horses prancing by with flowers heaped on their butts, as fine a metaphor for overcoming adversity as I can imagine. A group of ladies from a foreign land doing swirly dances in diaphanous costumes. Bagpipers with knobby knees. A teeny tiny ladybug float that must have represented a budget shortfall in the city of Washougal. The Budweiser Clydesdales, which halted for a few minutes, casting about for people to stomp into salsa. The annoying announcer lady on the stand warning us to stay out of their way, just before she climbed down to have her picture taken in front of them. More swirly costumes. And then, a magnificent troupe of choreographed–what the hell? Street washing machines? 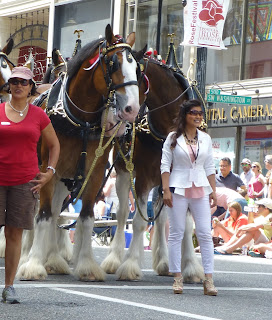 We missed the One More Time Around Marching Band, the old farts that maybe slap a rose on their antique high-school instruments and play Louie Louie to the very limit of their lungs for three miles. We missed every single float bigger than a ladybug. We missed the Rose Festival Court, although they’ve really been missing for years.

Used to be a thing. Every high school had a princess, and a nod was given to those who had a decent grade point average or a lofty personal goal and consideration for mankind, but they were all cute and sweet and decent, and we followed their selections in the paper, and picked favorites, and noted with approval their chaste matching outfits, and their trips to the nursing homes, and the coronation of the Queen the night before the parade. Then all those activities became suspect, and a greater effort was made to include girls who relied a little harder on their Inner Beauty, and then the whole princess idea became so civically embarrassing that they just nominated them in the dark of night and issued them matching T-shirts and jammed them onto a float and gave one of them a tiara but didn’t tell anyone about it, and nobody cares anymore. Missed them too. 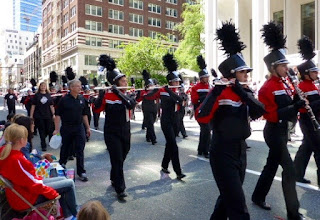 But I can close my eyes and imagine the rest, the best. The high school marching bands from Wilson, from Beaverton, from Battle Ground, from all around, resplendent in polyester, kept apart sonically by wedges of floats and classic cars and llamas, but carrying the day, a glory in brass, a resounding pair of Louies bobbing above a sea of Uptown Funk. Don’t believe me, just watch.