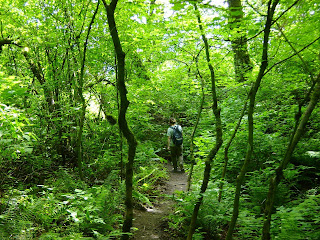 My niece Elizabeth hauled me out to the Columbia River Gorge the other day for a nice seven-mile loop hike at Cape Horn, just to see if the old lady’s still got it, knows where she left it, and can still get it moving. Here’s a geology lesson: hikes in the Gorge are always uphill. Otherwise, the water in the river would go all over the place.

That bit about being uphill both ways, though, that’s not just something old people say. It’s also something old people do, by the simple expedient of going backwards on the trail enough times. This is a relatively new trail, without as much signage as one might want, so it comes with a very detailed set of directions. Whoever wrote them, however, was stoned. So you might be directed to hang a roscoe past the third tiger lily on the left, and continue under the branch with the Swainson’s thrush in it; but come up on an intersection bristling with trails radiating out every which way, and the directions have no opinion about it. As a consequence we wandered in circles for a while, hopi 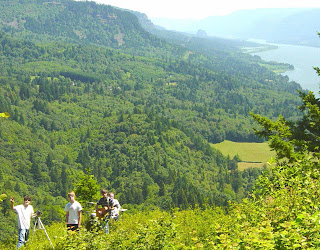 ng for some kind of sign , and just then: pah-dah-BUM. CRASH!

Cymbals they were, and an entire drum kit, guitars, the works. A small band was set up, three miles into the trail, on a tiny knob overlooking the gorge, all operated by a group of young fellows whose parents had apparently asked them if they knew how to play “Far, far away.” They were a sign, all right; they were on a complete dead-end, and we were lost.

We regrouped and located the trail, and didn’t backtrack again until a bit later when I realized we had overshot a little spur to a waterfall. It wasn’t much of a waterfall by Gorge standards, but it did allow Dave to do something he manages to do on at least half our hikes. He bounds nimbly onto an outcrop the size of a bath mat, tilts way out over the sheer vertical drop-off, and announces you can see the whole waterfall from there, and I must come out and look. Bless his heart, the man hates to have me miss out on something wonderful. (For thirty years he has never known m 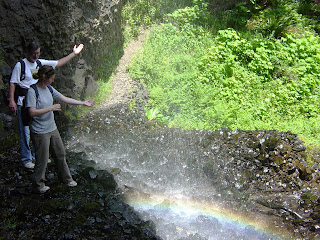 e to eat an oyster, mussel, or clam, which I refer to collectively as “sea loogies,” but still he will hold out that blob of snot on the half-shell and wheedle, “Just try it.”) Meanwhile, because I am perfectly capable of tipping over on flat ground, I am standing several yards in from the edge and leaning inland hard. “Come on out–I’ll hold onto your pants,” he always says. Honey, you’re not going to want to hold onto my pants after I get done with them out there.

The final waterfall, at about six miles, is the sort you can walk behind, and it showed up just when we really needed it. Actually, it came about two hours after we really needed it, but we still needed it. It was cool and refreshing and had a nice stubby rainbow at the bottom. I looked for the proverbial pot of salamanders at its end, but it’s never there.