Cascara Your Fate To The Wind 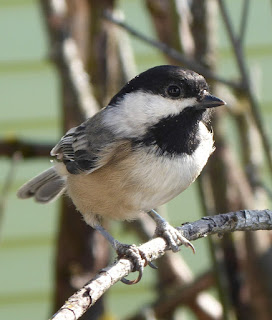 We’ve discussed this before. There are people who worry about every little thing and fret their lives away only to find the thing they worry about doesn’t come to pass. Although this is probably because they did something about it. And there are people who don’t worry about anything and live lives filled with joy and happiness and then pay someone ten grand to rebuild the side of their house, not that I’m naming any names.

I have been aware, however, that the cascara tree just outside my writing room window has been dying for several years, and in fact now sports only a cowlick of a living portion arising from one live branch on an otherwise dead trunk. Let it be noted I also knew that the base of the tree is split and a good three-quarters of it is heading north, i.e. toward my window. And at a fair clip. 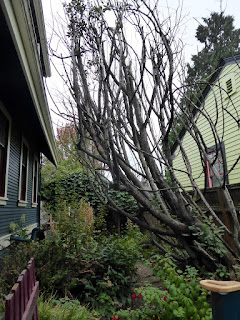 So it’s not that I didn’t know. The thing is, like any other person fond of birds, I do not consider my nearly dead tree to lack value. It is perfectly clear that many, many people find it very valuable indeed, if by “people” you mean “birds.” Our chief chickadee Studley Windowson considers it his home base, and like the nuthatches and scrub jays, has been studding the bark with sunflower seeds all summer. I don’t know who gets to harvest, but it’s a laudable enterprise with winter coming.

Other than that, the tree is ugly as hell, from a human standpoint. It looks like it was designed by a drunken menorah maker. Branches curve out from the base and verticals soar up from them. Whereas Studley has been observed to light on any available twig, he does favor a certain few. These days he lands in them specifically to stare at me and chip-chip while I’m at my laptop until I put one finger up, run down to the fridge for the mealworms, and pop back, where he is waiting patiently for me to open the window. He will come for a worm, fly back to a branch, pin the worm down with his foot, and nip off bite-sized segments like a gentleman sawing a steak. If he had a napkin, he’d tuck it under his chin, if he had a chin. If he had a pinky, he’d hold it out. 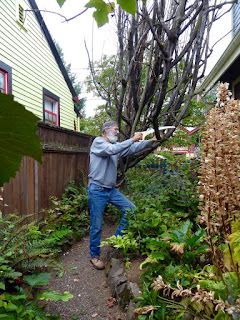 The upshot of all this is that although I know the tree is destined to crumble away, and not necessarily in a tidy or insurable fashion, I am fine with leaving its ugly self be, where Studley and the woodpeckers and bushtits can do their things. So this is where denial starts to play a role. I want the tree to stay, so I will it upright, mentally.

It was only a month or two ago that I noticed I had to tilt my head to walk the path next to it. I wasn’t sure, but it seemed possible I’d been doing that all along, right? A few weeks later, I was actually ducking. Hmm, thought I. That seems new. Last week I had to crouch to get under it. Upstairs, when I looked out at all the verticals in the crown of the tree, they were diagonal. I finally put three and four together and sent Dave out with a pruning saw. “Just take a little weight off of it,” I said, as though he were my hairdresser. “I want to keep as much as possible for Studley and the gang.”

Which he did. However he shook the tree enough in the process that it’s a good foot and a half closer to my window now. “Try not to pull the whole tree down,” I distinctly remember instructing, which shouldn’t be necessary, but I’ve seen him do that before. He can pull down a tree. I suspect I’m going to have to take the whole thing down after all, except for the one live bit coming out the middle. I have two apprentice cascaras growing up through it. They’re eager enough, but they’re several years away from getting journeyman height to them. I don’t know what to say to Studley. I don’t know if anyone is going to want to rent the birdhouse next spring with nothing to land in nearby. It’s a sad day in the bird real estate world.