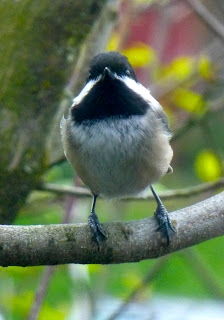 I looked online to find out how to tell chickadees apart. A few sites suggested that the males have a bit more contrast between their white and black patches than the females. Myself, I would have thought that black-and-white is pretty much the gold standard for contrast already, but then again I have a closet full of black clothes that don’t match each other, so maybe there’s something to it. The problem with this method of chickadetermining is that it works unless it doesn’t. Nobody seems to be real confident about it, and it may have been made up by someone with intermittent astigmatism.

I am further informed that the male sings to the female for several weeks to get her in the mood, but he mainly does it at daybreak, which does not intersect with any of my periods of consciousness. Supposedly, the female is the one that makes up the mattress in the nesting box. I’m thinking the researchers are flying blind here, and the only really good way to tell who’s the female is to see who drops an egg. Or, conceivably, who is on top during the two-second sex act the male has been singing his heart out for. On many animals, the male has a little tag hanging down with his identity on it, but not in chickadees. Both male and female have a cloaca, an all-purpose vent, and during the sex act the birds get close enough to swap schmutz from their cloacas, although even then I would think who gets to be on top might well be a matter of 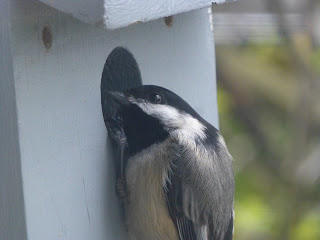 personal preference and not really any business of ours, or the state’s.

Ducks do have something like penises, quite impressive ones really, fashioned from an exuberant portion of their cloacas and powered by lymph instead of blood. Evolutionarily speaking, the reason they have developed such an item is to ensure that their contribution to the gene pool gets inside the female rather than washing out in the pond, because walking barefoot in a duck pond is revolting enough already.

I still maintain that we can’t know anything for sure until the egg comes out, and at that point researchers, if they want to know who does what, should make them little hats. I have decided to go

with my gut as usual and figure it out from what I’ve observed. So far, there has been no furniture moving in the house, but quite a lot of inspection. One of the birds darts straight in and stays a while, and the other one prefers to hang by one claw from the doorhole and inspect the roof. I think the female is inside, deciding where the piano goes, and the male is outside, trying to see if the structure is strong 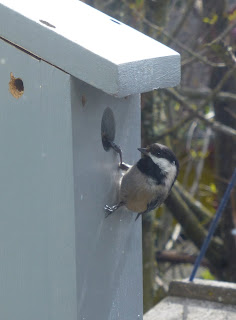 In general, the literature recommends keeping one’s distance from the observed birds so as not to disturb their mating rituals or cause them undue stress. Admittedly, I am only a few feet away, but I am not concerned. There is nothing less disturbing than a nearby writer. Most of the time, she doesn’t move at all.