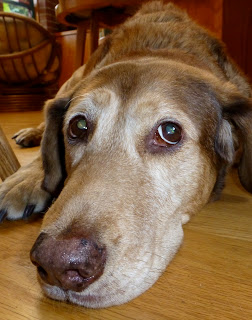 I heard on the TV that dogs really are good at reading human emotions because they spend more time studying the right side of our faces, and that’s what we do with each other, too. I was startled to realize that I actually do look at the right side of people’s faces, which present at my left, and that I’d never noticed this before. I also chew my food on the left side and slouch to the left and my left breast is–well, let’s just say it’s closer to the ground now, and it’s no wonder I tip over so often.

The phenomenon is called “left gaze bias” and the explanation is that our eyes flick to our companion’s right side (left to us) because that’s where all their emotions are displayed. The theory is that the left brain controls the right side of the body, and the right side controls the left, in those people whose bodies can be said to be responding to a brain at all. And presumably the left side of the brain is in charge of feelings, and leaks them out the right side of our faces. If you have any interest in knowing what’s on someone’s mind, which can come in handy if they want to murder you, for instance, you’re more likely to make the gene pool cut by looking at his right side. All the strategy, the ambush plan and the sharp rock and the alibi and the like, are being worked out on the right side of the brain, but the murderous intent is totally happening on the left. 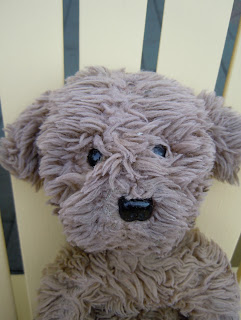 So somewhere along the evolutionary line, dogs learned where to look on a person to find out what was on his mind, and that means they are now exquisitely attuned to our emotions. Most people like that about dogs. They intuitively feel that their dogs understand them and sympathize with them and offer themselves up for comfort. As a mail carrier, I too learned to appreciate that dogs were able to gaze into my right eye and determine that I looked chewy-crunchy, with a salty finish.

Supposedly we only have left-gaze bias toward other humans, and not (say) paintings of people, or monkeys. (I will, however, note here that I reflexively look at Pootie’s right eye button, and leave it at that. No one wants to be ambushed.)

We had a dog once, the cutest dog in the whole wide world, and she was very good at reading our emotions, but then again we aren’t complicated people. She would cock her little head to the right and think “you look like you want a beer” and nail it most of the time. We would look at her and get a mixed message. “I like you,” she emoted, “but I need to go outside now and climb over the hedge and go over 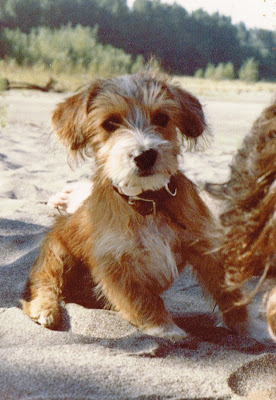 to the neighbor’s house and knock, and he will give me a plateful of biscuits and gravy.” It was nothing personal. She didn’t care for kibble, even after the 25-pound bag of it we bought when she was little had aged nicely. From time to time we’d give in and feed her from the table, but we made up for it by teaching her to take whatever we gave her into the kitchen before eating it. So when she knocked at the front door after visiting the neighbor’s house, she would bolt to the kitchen before yarfing up a quantity of biscuits and gravy that could not physically have fit in her body. Boomer and I both operated on the principle that you’re not done eating until all the food is gone. It was our bond. We gazed into each other’s right eyes in perfect understanding, and then one of us went and got the paper towels.